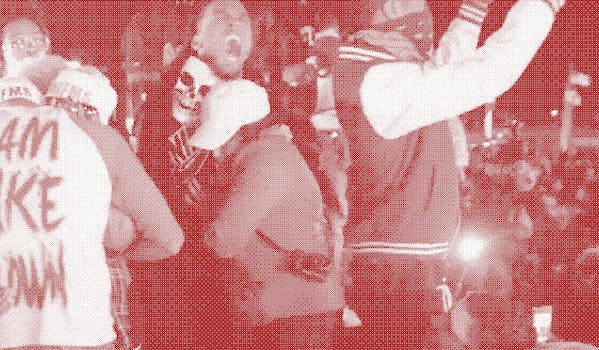 Ferguson police: Michael Brown’s stepfather may have incited a riot

Ferguson police are pursuing an investigation to determine whether to charge Michael Brown’s stepfather for allegedly inciting a riot, the city’s police chief said.

Over 80 arrests were made in and around the city of Ferguson, Mo., after St. Louis County prosecutor Robert McCulloch announced on Nov. 24 that a grand jury had declined to file charges against a Ferguson police for the fatal shooting of Brown in August. Rioters looted and burned more than two dozen area business the night of the decision.

Footage obtained by the New York Times on Nov. 25 captured the visceral, emotional response of Louis Head, Brown’s stepfather, to the news that Officer Darren Wilson would not face charges in connection to his stepson’s death. After Brown’s mother, Lesley McSpadden, broke down into tears, Head embraced her, then repeatedly yelled: “Burn this bitch down.”

Ferguson Police Chief Thomas Jackson told Fox News during a segment focused on prosecuting individuals who participated in the riot that his department is investigating Head’s actions. “Do you believe those comments should be pursued,” Fox News host Sean Hannity asked Jackson. “Is that inciting a riot?”

“We are pursuing those comments,” Jackson replied.

Police are still investigating potential ties between the aftermath of the grand jury’s decision and the homicide of Deandre Joshua, 20, whose body was found shot and burnt in a vehicle the morning after the riots near the street where Brown died. Rumors that the victim had been called as a grand jury witness were refuted this week by his family and a former girlfriend.

Missouri Lt. Governor Peter Kinder was asked by conservative talk show host Laura Ingraham for his reaction to Head’s comments over the weekend. Kinder replied: “He should be arrested and charged with inciting to riot.”