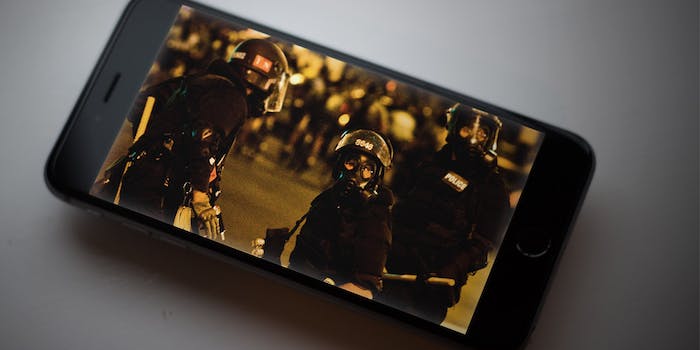 You can watch the entire thing play out.

Amid the chaos of the rioting in Ferguson, Mo., last night, one of the more unusual events was a citizen journalist whose phone was stolen while he was livestreaming the protests. As Bassem Masri’s iPhone 6 was wrenched out of his hands, and as the thief gloated and sprinted away, the iPhone continued to broadcast, treating Masri’s viewers to real-time footage of the theft.

Here’s the video. The theft takes place around the 2:30 mark.

Masri subsequently went on Twitter to reassure his viewers that he was unharmed. He also spouted some outlandish theories about the man who stole his phone: Opportunist criminal, or secretive police agitator?

In the months since police officer Darren Wilson fatally shot unarmed teenager Michael Brown, there has been a boom in livestreamers in the St. Louis suburb. These citizen journalists have broadcast footage of Ferguson’s civic unrest to the rest of the world, leading to global media attention.

After a St. Louis grand jury’s decision on Monday not to indict Wilson for Brown’s death, Ferguson exploded, as police used tear gas and rubber bullets to combat angry protesters, and rioters broke into shops and set police cars on fire. The livestreamers were there to capture it all.

Masri’s false-flag theory about his phone theft is highly unlikely. Law enforcement has been widely criticized for its heavy-handed approach in Ferguson—take the officers who fired tear gas at a crowd trying to help an unconscious woman last night—but there’s absolutely no evidence that St. Louis police have been planting “agitators” among the protesters to rob citizen journalists.

If there’s a moral to this story, it’s that you shouldn’t wave your new iPhone around during some of the most significant riots in decades, or something just might happen to it.