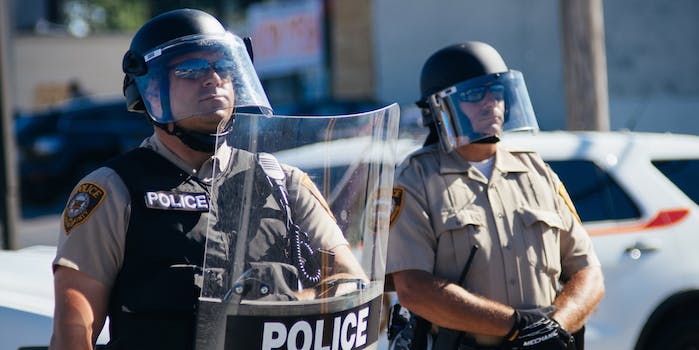 It's still way too little, way too late.

Law enforcement officials in Ferguson, Mo., are starting to face consequences in the wake of a scathing Department of Justice report released earlier this week documenting repeated instances of racism inside the Ferguson police department.

On Wednesday, Ferguson officials fired one police officer and suspended two more over internal emails disparaging to African Americans. However, while the report also described an almost entirely white police department systemically targeting the city’s predominantly black population, no announcement of larger reforms has been made.

The report, which the Department of Justice compiled over the span of several months, highlighted several racially-tinged emails sent within the Ferguson Police Department over the years to indicate the attitudes of many of the people tasked with protecting and serving the city’s African American community.

One email, sent shortly after Barack Obama was elected in 2008, said that the president wouldn’t last long in the Oval Office because “What black man holds a steady job for four years?”

Another joked about how a man applied for “welfare” for his dogs because they are “mixed in color, unemployed, lazy, can’t speak English and have no frigging clue who their Daddies are.”

A third read: “An African-American woman in New Orleans was admitted into the hospital for a pregnancy termination. Two weeks later she received a check for $5,000. She phoned the hospital to ask who it was from. The hospital said, ‘Crimestoppers.'”

During a press conference shortly after the release of the report, Ferguson Mayor James Knowles said that some of the officers who had sent those emails were being disciplined with suspensions and terminations.

“Let me be clear, this type of behavior will not be tolerated in the Ferguson Police Department or in any department in the city of Ferguson,” Knowles said. “These actions taken by these individuals are in no way representative of the employees of the city of Ferguson.”

At that same press conference, Knowles said that the the city had retained a independent counsel recommended by the Justice Department, but he did not specify whether or not Ferguson police chief Tom Jackson would keep his job. There have been calls for Jackson’s removal since shortly after Brown’s death. While Jackson has released a video apologizing to the community, he has remained in his position.

The initial intent of the Department of Justice’s involvement in Ferguson was to determine whether or not to Wilson had violated federal civil-rights law in shooting Brown. The department decided not to indict Wilson, explaining the rationale in a separate report also released this week.

Even though the combined reports didn’t attach blame to Wilson’s specific actions, they argued that the entire department consistently and systematically violated the constitutional rights of the city’s African American community.

For example, the report found that, while Ferguson’s population is about two-thirds black, African Americans accounted for 85 percent of vehicles stopped, 93 percent of all arrests, and 88 percent of the incidents that involved the use of force. During a two-year period, 100 percent of the people cited for “resisting arrest” were black.

In addition, the report charged that the focus of Ferguson’s law enforcement strategy was less about keeping people safe and more about filling the government’s coffers by charging offenders with a barrage of fines and court fees.

“This emphasis on revenue has compromised the institutional character of Ferguson’s police department, contributing to a pattern of unconstitutional policing and has also shaped its municipal court, leading to procedures that raise due process concerns and inflict unnecessary harm on members of the Ferguson community,” the report read. “The evidence we have found shows that these arrest warrants are used almost exclusively for the purpose of compelling payment through the threat of incarceration.”

The report told a story about officers accusing an African American man cooling off in his car after playing basketball of being a pedophile. Police arrested the man for, among other things, telling the arresting officer that his name was “Mike” instead of “Michael.” Due to this flagrantly unconstitutional arrest, the man lost his job as a federal contractor.

Another instance recounted in the report occurred in 2011, when a police dog attacked a 14-year old boy who was waiting for his friends inside of an abandoned house. While the boy was writhing on ground being bitten by the dog, the attendant officers “struck him while he was on the ground, one of them putting a boot on the side of his head. He recalled the officers laughing about the incident afterward.”

The racist emails may be relatively simple to address by discipling a few officers, but changing a municipality’s entire justice system is a much more difficult task—one that will undoubtedly require action by officials outside the city limits.

“The Department of Justice’s report on the Ferguson Police Department are deeply disturbing, and demonstrate the urgent need for the reforms I have called for, some of which the General Assembly is now considering, including reforms to municipal courts,” Missouri Governor Jay Nixon said in a statement. “Discrimination has no place in our justice system and no place in a democratic society. All Missourians deserve to be treated with fairness, dignity and respect. That is why I will continue to work to enact policies and legislation that promote greater fairness, equality and inclusion in all our communities.”