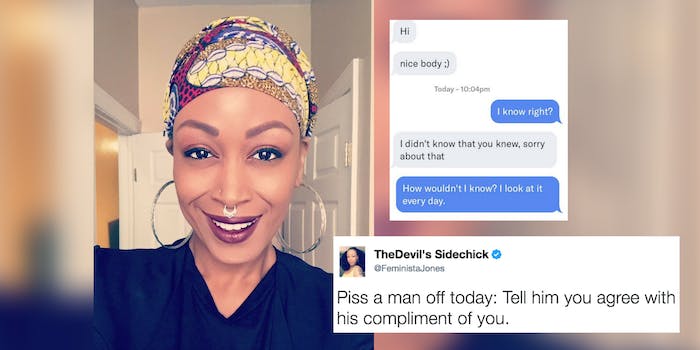 Saying "thanks" is never good enough.

Accepting unwanted attention as a woman can often feel like a catch 22—if a man compliments you and you swerve, he could get mad. If you deliver a simple “thanks,” he’ll say you’re ungrateful. And if you straight up agree with him, he’ll take back that compliment and neg you straight into the next century.

On Friday, social worker, author, and activist Feminista Jones let those exact situations play out when she suggested her followers take the seemingly hypothetical but very real challenge of agreeing with a man who compliments them.

Piss a man off today: Tell him you agree with his compliment of you.

In her Twitter thread that followed, Jones explained that she’s found men are straight up uneasy when women accept their compliments and even get pissed off when women replied with a no-frills “thank you.”

“I see it every day because that’s my usual response,” Jones wrote on Twitter. “That goes back to what most women were saying [about] their experiences [with] this. The expectation’s that women should show no self-appreciation and/or should be overjoyed by a someone (a man) saying something positive about them (that they weren’t supposed to know already.”

Also an interesting observation is how many assume that a woman wouldn't say Thank You when agreeing with them. Lol

Jones explained to BuzzFeed News that she wanted to share her thoughts on the subject because of other posts written about this “compliment” problem, and her own experiences with her straightforward replies.

“It’s not a new idea, but in my own experience when [a man] complimented me and I say, ‘I agree,’ they get upset,” Jones told the site. “It’s the idea that they bestow the compliment on you, and you’re not supposed to be aware of it.”

Immediately, women responded to Jones with the responses they’ve received, which went as disappointingly as expected, with the complimenters either rolling back on what they said or completely insulting the women in reply.

I do this all the time. Watching them do a whole 360 tryna retract their statement is entertaining https://t.co/grzK30DzCe

This isn’t the first time an experiment like Jones’ has been put into action, and it certainly won’t be the last. In 2015, a Tumblr user named Claire shared her findings from a similar experiment in which she just straight up agreed with men’s compliments on dating apps.

Around that same time, a college student named Gweneth Bateman shared Claire’s screenshots and one from another woman (whose suitor replied, “I mean no u arent lol”) to Twitter.

When she received replies saying she should reply with a “thanks,” instead of being “rude” by agreeing, Bateman received the same exact responses.

“Being vain won’t get you anywhere it just makes you a bitch,” one person replied.

While Jones says not all dudes are guilty of flailing at a woman’s acceptance of a compliment, she suggested that men who believe they haven’t witnessed or engaged in this behavior should just listen to the women who have.

“This is my blanket commentary: Just because you don’t do it or you don’t see it being done, doesn’t mean it doesn’t happen,” Jones said. “When men go, ‘Not all men,’ they make it about ‘I’ve never seen it, I’ve never done it … so it can’t be true.’”