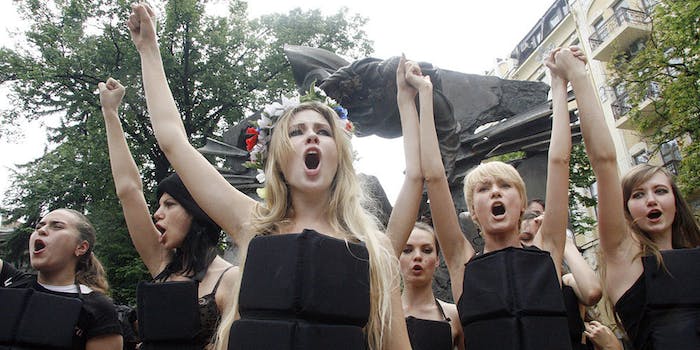 This gives new meaning to 'NSFW.'

Warning: This article contains images that are NSFW.

Let’s get a better look, shall we?

In the off chance you’re reading this for reasons other than wanting to watch a cop fall on his face or, you know, boobs: This shining example of police work comes courtesy of the Compagnies Républicaines de Sécurité, the riot officers of the French National Police.

The topless women running down the street are members of FEMEN (NSFW link), a feminist activism organization, originally from the Ukraine, that fights against religious oppression, sex tourism, gender discrimination, and homophobia, among other grievances, but are best known on the Internet for their lack of clothing.

Police reportedly arrested at least 25 FEMEN protesters this weekend during a rally in support of fellow FEMEN member Iana Zhdanova, who was convicted for “sexual exhibitionism” in a French court on Oct. 15 for stabbing a wax statue of Russian President Vladimir Putin with a wooden stake while topless, with the words “Kill Putin” painted across her breasts.

A judge ordered 26-year-old Zhdanova to pay a €1,500 (about $1,900) fine. Zhdanova’s attorney, Marie Dose, says she plans to appeal. Until that happens, we’ll just be here, watching this GIF.