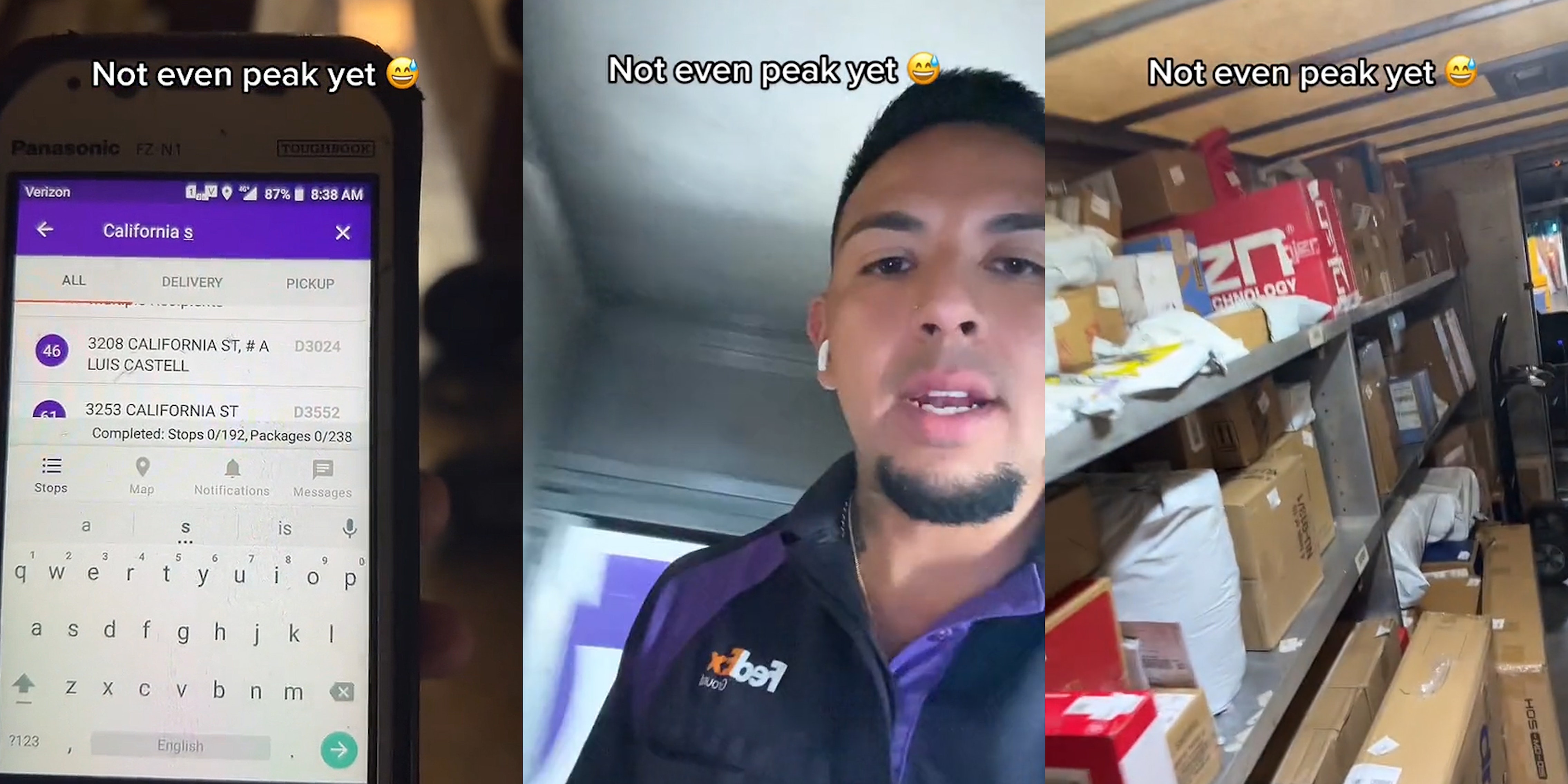 ‘Too much work for little pay’: FedEx driver makes 192 stops in one day, sparking debate

'Y’all need to unionize to make that UPS money.'

A FedEx delivery driver posted a viral TikTok video on the job, sparking conversation about the heavy workload—and packages—that the company’s employees are responsible for.

In the TikTok, Anthony Cruz (@sumlite707) documents what he says is a normal day as a FedEx ground delivery driver. The video had over 4,000 likes before it disappeared from his account on Tuesday.

“Today I got 192 stops, 238 packages,” Cruz said as he showed the camera his crowded digital map of the package destinations.

He panned the camera to show the several towers of brown boxes stacked in the back of his delivery truck.

“And yes, I organize everything because the loaders can’t do it themselves,” he added.

Cruz wrote in the comments that the workload took him around six hours to complete without any helpers.

“Not even peak yet,” Cruz wrote on the TikTok.

With the holidays quickly approaching, peak season, or the time of year when FedEx gets the most orders, is just around the corner. The video was posted just before the start of the surge.

“Normal day? God dayum,” one commenter wrote. “I can only imagine what it’s like during Christmas!!!”

“I remember when I worked at FedEx, peak was the worst,” an ex-FedEx employee shared.

According to ZipRecruiter, the U.S. company pays its ground delivery drivers an average of $18.00 an hour or a little over $36,000 a year.

According to the U.S. Bureau of Labor Statistics, the average hourly earning in September of this year—for employees in the trade, transportation, and utility industries—was $27.74.

“Too much work for little pay,” one person wrote.

“I make more as a server,” another claimed.

“I’m satisfied, but, I mean, who wouldn’t like to get paid more,” Cruz told the Daily Dot.

Other commenters tried to persuade Cruz to work as a delivery driver for the United Parcel Service instead, alleging that there are better working conditions.

According to ZipRecruiter, UPS pays employees a dollar more than FedEx on average.

Some commenters reiterated the importance of having a union.

“Y’all need to unionize to make that UPS money,” someone wrote.

UPS has a long history of being unionized, while FedEx has made several anti-union efforts in the past couple of years.

“What is happening to the workforce within FedEx is unconscionable,” the original post reads. “It’s amazing that there is no union representation.”

“If you don’t like it, leave,” another wrote. “Plenty of jobs out there. If no one is there to do the work, the masters are forced to change the work.”

“I don’t want to leave, I want a union,” someone responded.

When it comes to unions, “I can’t really argue about it because I have no say,” Cruz said. “I just come to do my job. I enjoy giving the service I do to my customers, and love working for FedEx.”

FedEx did not immediately respond to the Daily Dot’s request for comment.