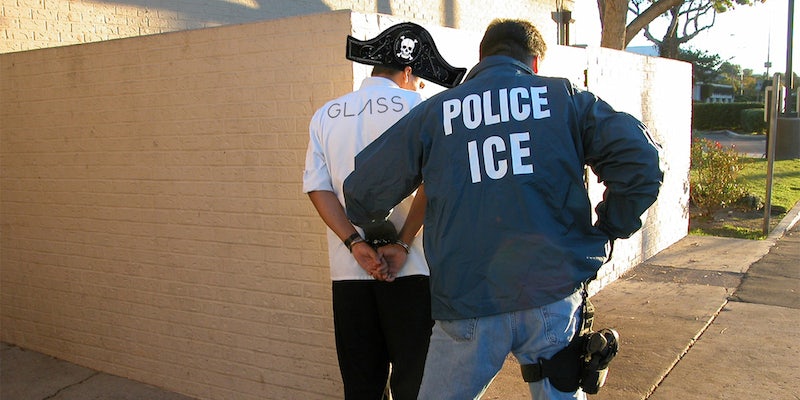 Federal agents tore a man's Google Glass off his face at a movie theater. Why were they doing the MPAA's dirty work?

On Jan. 18, a man walked into an AMC theater at a Columbus, Ohio shopping mall to watch a movie. He was with his wife, and it was the couple’s third time going to the movies with his new favorite gadget: Google Glass, fitted with prescription lenses so he could wear them as his everyday glasses.

Midway through the spy movie Jack Ryan: Shadow Recruit, a man suddenly appeared near his seat, flashed a badge, and ordered him to come outside. Outside the theater, men who appeared to be police officers yanked the glasses from the man’s face. He demanded their identification, but they just told him they were with the “federal service” and hustled him into a back room of the mall.

That’s when another man opened the door. He identified himself as “Bob Hope.” He said he worked for the “movie association” and he had some questions:

Why was the man with Glass recording the movie? Who was he going to give the video to? Why wouldn’t he give up his employer’s name?

It was hours, the man would later say, before his interrogators finally hooked the Glass up to a computer to see what files were on it. They found nothing incriminating. As compensation for the hours-long interrogation, the men gave the Glass owner a handful of free movie passes, then sent him on his way.

It was later revealed the agents worked for the Department of Homeland Security.

Over the coming days, in the face of online outrage over the story, corporate and government entities began to release a trickle of information about what happened, though the picture they painted was murky at best.

“Columbus PD was on the site with us,” a DHS spokesperson told me.

“Our department did not handle any of that. It was the Feds,” Columbus Police Department Sergeant Rich Weiner told me, though he assured me the theater was within their jurisdiction.

“I can tell you for sure there were at least three guys with white uniforms which I associate with Columbus PD, and there were at least two guys in dark uniforms,” the Glass owner told me. He noted it wasn’t clear who, exactly, was detaining him at the time, and he was initially under the impression it was the FBI.

Mall police refused to go on record, but a source with direct knowledge of that day’s operations said they were in no way involved.

The real question, though, isn’t whether the feds were acting alone. It’s why they were at a movie theater in Ohio in the first place.

Immigrations and Customs Enforcement (ICE), the Homeland Security subdivision present for the interrogation, wasn’t always like this.

ICE was founded, alongside DHS, in 2002, as part of the massive post-9/11 government shakeup that the civilian world is only now beginning to sort through. The organization employs 19,000 people in more than 400 locations, making it the second largest American law enforcement agency after the FBI.

ICE’s website features an extensive photo gallery of its exploits, which make perfect fodder for viral headlines. Travelling to Puerto Rico to nab Americans smuggling thousands of kilos of cocaine, then showing it off in a press conference, Hank Schrader-style? Done. Discovering and raiding a 600-yard underground drug tunnel from the U.S. to Mexico? Yes. Reclaiming a T-Rex skeleton stolen from the Mongolian government? God, yes.

So what brought them to an Ohio shopping mall to jump an unsuspecting local nerd?

In 2008, Congress passed the Prioritizing Resources and Organization for Intellectual Property, or PRO-IP Act. Suddenly, protecting the trademarks and copyrights of American companies became a huge priority for a number of law enforcement agencies, including ICE.

Soon, ICE was enforcing American intellectual property rights all over the globe. In 2009, the agency arrested 266 people in IP investigations, busting people who sell counterfeit movies, stream pirated content on websites, and sell licensed NFL gear. ICE more than doubled that number of arrests over the next two years.

They instituted “Operation Red Zone,” an annual tradition of busting merchants and websites dealing in unlicensed NFL gear right before the Super Bowl.

In 2010, ICE launched “Operation In Our Sites,” aimed at seizing websites, and sometimes prosecuting their owners—though it bears noting that not every site actually violated the law.

“American business is under assault from counterfeiters and pirates every day, seven days a week,”  ICE assistant secretary John T. Morton said at the time. “Criminals are stealing American ideas and products and distributing them over the Internet.”

At 224 square miles, Columbus is a big city, geographically speaking. So the Easton Town Center, in the northeast corner of city limits, isn’t the easiest for everyone to get to. That’s not to say it’s a quiet place—people come in droves, actually—but it’s appropriate, given that it’s something of an elite mall. Largely outdoors, it’s landscaped with fountains and open public space, and what it lacks in local stores,  it makes up for with 1.7 million square feet of shopping from some of the country’s most upscale chain stores.

AMC 30, Easton’s theater, is special, too. It was one of the first locations where AMC tried out fancy in-theater dining, and the site of a failed collaboration with Planet Hollywood.

“That AMC in particular is one of the largest and is usually a test market for new things,” a former AMC 30 employee, who requested her name not be used, told me. And the theater was serious about its anti-piracy efforts.

“They showed us ways that people typically tried to hide cameras, like putting it in a big bag that had a hole cut out of it for the lens to poke through,” she said. “They said that if we reported someone using a recording device to record a movie, we’d get $1,000.”

At least one other employee had gotten paid that way, she said.

As it turns out, a version of that program, called “Take Action!” is available on a decrepit old website. It lays out a clear incentive: Anyone who follows a six-step process, including calling local police, physically stopping a pirate from finishing the movie, and filling out a form and waiting 4-6 weeks, is given that bonus. (It’s listed at $500 on the site.) I called the number to see what it’s like to report piracy, but got an answering service. The woman on the other end of the line wasn’t even sure what time zone the program’s usual employees are in.

Funny thing about “Take Action!”: Movie theaters tell their employees about it, but they don’t pay the $1,000 bounties. Those come from the Motion Picture Association of America, a superteam of Hollywood’s six biggest movie studios.

The MPAA is not well-liked by most geeks and Internet freedom activists, who see it as a cross between a corporate lobbyist and a tut-tutting schoolmarm. It’s open about its mission to use its political influence to stop piracy at any cost, even when that means shutting down innocent uses of cool technology.

It was the MPAA that testified before Congress in1982 that the VHS would kill Hollywood, that warned you piracy was a serious crime, that told you that you wouldn’t download a car. The MPAA was a major lobbying force behind the notorious Stop Online Piracy Act, the bill that would have made it easy to censor any webpage thought to contain a link to pirated media.

When the Internet went on strike against SOPA in Jan. 2012, the MPAA’s president, former Sen. Chris Dodd, was unabashed about pulling the strings. “Candidly, those who count on ‘Hollywood’ for support need to understand that this industry is watching very carefully who’s going to stand up for them when their job is at stake,” he said at the time. “Don’t ask me to write a check for you when you think your job is at risk and then don’t pay any attention to me when my job is at stake.”

It’s in lobbying that the MPAA finds its true power. It’s not just Dodd: Its ranks are riddled with politicians. Just Monday, the organization announced it had hired two new executives, one a former staffer for Sen. Mitch McConnell, the other under Rep. John Conyers.

So it should come as no surprise that a search through the archives of Maplight.org, which tracks corporate lobbying in politics, shows the MPAA was a major financial backer of the PRO-IP Act, that bill that prompted ICE’s big piracy crackdown and eventually led to an Ohio man’s Google Glass being ripped from his face.

“Industries are getting taxpayers to do their work for them. What other industries get federal agencies to act as their own private police force? It’s nauseating,” said Aram Sinnreich, a journalism professor at Rutgers University and author of The Piracy Crusade, a book on the music and film industry’s anti-piracy efforts.

“We’re supposed to believe that it’s somehow to national interest to spend our taxpayer dollars on that?”

According to Maplight’s figures, supporters of the Pro-IP act, including the MPAA, received more than $15 million in lobbying money for the bill. Opponents received $0. Digging deeper through the Sunlight Foundation’s Influence Explorer when researching his book, Sinnreich found almost $3 billion in “funding for ‘copyright reform,’ which is a euphemism.”

But ICE doesn’t see copyright reform as just a matter of busting anyone who violates the movie industry’s valuable IP.

“We don’t just arrest our way out of problems, we often educate people,” one ICE representative told me. The MPAA is a rightsholder. It has to protect its members. Like Louis Vuitton, or the NFL, or watchmakers, or bike makers.

“Both [ICE agents] were very young. If I would have to guess, I would say 25 to 27 years old,” the Glass-wearer told me. “Being at the beginning of their career, with very little experience, it is expected they make mistakes. It was just unfortunate I was the subject of their mistake.”

“Bob Hope,” the guy from the “movie association,” is real. He gave a business card to the Glass-wearer, who scanned it and sent it to me. Hope runs a company called Hi-Hope Consulting, which specializes in “Loss Prevention and Investigations.”

Hi-Hope is not a high-tech affair. Its website has gone fallow, last updated in 2004. When I rang the office number, it auto-forwarded to Hope’s home. That makes sense: Google Street View shows his company to be a moderate-sized, one-story grey house in a tree-lined suburb of Cleveland.

I introduced myself, and told him I knew he worked for the MPAA, and that he had identified the man wearing Glass. It was the evening, and I clearly had taken him aback with my call.

“I work for the Motion Picture….I can’t give any information on them; I’d be fired,” Hope said. He sounded older, and cautious, with an Inland North accent. I pictured Robert Forster.

“You have to talk to the Motion Picture people,” he said, echoing a sentiment I heard from practically everyone who had knowledge of the situation. He waited a very long time. “It’ll come back to bite me.”

Eventually, he hung up.

Both AMC Theaters and the MPAA refused to comment for this story.