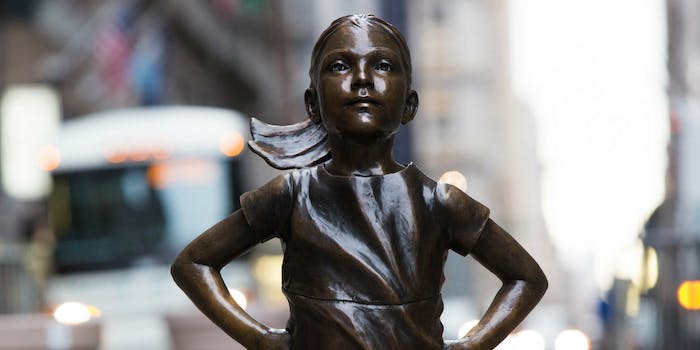 The feminist statue has become a symbol against those who created it.

The parent company of the financial firm behind the viral Fearless Girl statue will pay a total of $5 million to Black and female employees who, the U.S. Department of Labor say, were underpaid compared to their white, male peers.

In other words, the feminist symbol—a girl, with her hands on her hips, staring down Wall Street’s Charging Bull sculpture—now stands against the men who commissioned it.

According to the U.S. Department of Labor’s Office of Federal Contract Compliance Programs, an audit found that State Street Corp. discriminated against 300 women in senior roles and 15 Black executives at the vice president level. The investigation found that between 2010 and through 2011, they had been paid lower base salaries, bonuses, and total compensation in comparison to their white, male peers. State Street Corp. has denied the claims.

The investigation began in late 2012, but State Street Corp. was informed of having to take “corrective actions” on March 31, less than a month after the Fearless Girl statue by State Street Global Advisors (SSGA) made its debut on Wall Street. The company is a federal contractor and therefore undergoes regular audits from the Labor Department.

The settlement itself includes about $4.5 million in back pay to the Black and female executives, and an additional $500,000 in interest. The company is also required, for the next three years, to analyze compensation for employees in the senior-level roles that were under investigation. Meanwhile, the plaque at the base of the Fearless Girl statue reads, “Know the power of women in leadership. SHE makes a difference.”

“State Street is committed to equal pay practices and evaluates on an ongoing basis our internal processes to be sure our compensation, hiring and promotions programs are nondiscriminatory,” a State Street spokesperson said in a statement. “While we disagreed with the OFCCP’s analysis and findings, we have cooperated fully with them, and made a decision to bring this six-year-old matter to resolution and move forward.”

In May, SSGA was criticized for hiring two male executives, further contributing to the gender inequity on the company’s 82 percent male-led executive team. SSGA chief marketing officer Stephen Tisdalle recently addressed the criticism of the company’s perceived hypocrisy at an Advertising Week panel by saying he felt Fearless Girl’s presence was “the way we invest” and “the way the world needs to invest.”

“Do we as an organization reflect the penultimate makeup and reflection in being a diverse organization? No…What I would say to that is we had a foundation we could go back to to say why we did Fearless Girl, and no matter what anybody said, no matter what rocks were thrown, we could say, ‘You’re right, but this is the way we invest, this is the way the world needs to invest, this is a human moral value,” Tisdalle said. “How can you argue against it? We have to be doing better ourselves. She’s as much an inspiration to our organization as she is to the world.”

Well, you could argue that Tisdalle’s company wasn’t so much inspired by “her” than the branding of her—a company that believed that spending money on a bronze statue was more of an investment than adequately paying and hiring more women and people of color.