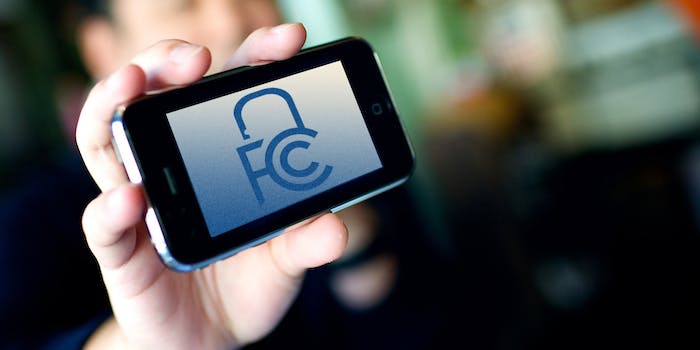 The groups contend the devices are being used predominately to target people of color.

A coalition of civil liberties groups on Tuesday asked the Federal Communications Commission (FCC) to investigate the use of controversial cellphone-tracking technology used by the Baltimore Police Department.

The department is accused of violating federal communications law through repeated use of fake cellular towers (also known as “cell-site simulators,” “IMSI catchers,”or “Stingrays”), which enable police to locate and track suspects’ cellphones by connecting to nearby devices. Specifically, the coalition—New America’s Open Technology Institute (OTI), Color of Chance, and Center for Media Justice—allege the use of these devices violates the Communications Act.

Baltimore P.D. did not seek legal authorization, the groups said, before transmitting over radio frequency bands exclusively licensed to cellular carriers. Experts on the technology assert the devices transmit using this restricted wireless spectrum, though an FCC official appeared to dispute this in remarks to the Washington Post on Monday.

The FCC official also reportedly suggested at one point that law enforcement was exempt from acquiring authorization.

“We look forward to reviewing the complaint filed today,” FCC spokesperson Neil Grace said. “The Commission expects state and local law enforcement to work through the appropriate legal processes to use these devices.”

Second, the groups contend law enforcement’s use of cell-site (CS) simulators compromises the integrity of cellular networks, preventing citizens in the area from contacting emergency services. The groups urging the FCC to investigate also said the use of CS simulators disproportionately target black citizens in Baltimore.

“The Baltimore City Police Department has had a long history of racially motivated and biased policing tactics, and its use of cell­-site simulators is no different,” said Eric Null, policy counsel at OTI. “The longer the FCC allows their use, the longer it repudiates its duty to ensure that communications networks are available to all without discrimination on the basis of race, color, or national origin.”

CS simulators work by masquerading as legitimate cell towers, tricking phones in the area into connecting to the device. This is accomplished by exploiting the inherent preference of cellular devices to locate the highest quality signal for communication. A CS simulator roughly the size of a suitcase is capable of intercepting data transmissions and can be used to track an individual’s location by triangulating the signal strength of nearby cell towers. It may also be possible to inject a cellphone with malware using one of these devices.

The Justice Department changed its policy last year to require federal law enforcement agencies to obtain a warrant before deploying cellphone-tracking devices. Those policies do not apply to state and local agencies, however.

Civil liberties advocates have long opposed the use of CS simulators because the devices also indiscriminately collect data belonging to innocent bystanders, and U.S. agencies are known to have deployed them while monitoring citizens engaged in First Amendment activities, like protesting.

Brandi Collins, campaign director at Color of Chance, said there’s been little oversight or accountability of police departments using “illegal” surveillance technologies. “The time for the FCC to take action to protect vulnerable communities by prohibiting the use of these surveillance devices is now,” she said.

T.J. Smith, a spokesman for the Baltimore P.D., declined to comment on the group’s allegations. “Due to this being pending litigation,” he said, “we are not at liberty to discuss further.”