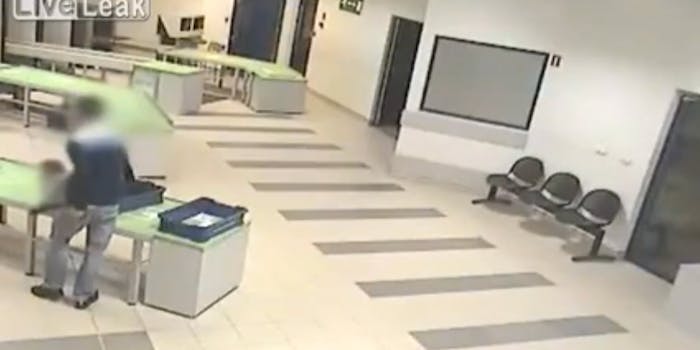 Airport security may have saved this baby’s life

The father's quick lapse in attention could have ended so much worse.

One airport security guard’s diligence just saved a baby from a nasty fall.

The incident took place at Katowice-Pyrzowice airport in Poland on Nov. 23, where an unidentified man placed his child on a table to collect his things after going through security. He looked away for one second, but that second was enough for the baby to fall off the table.

What the security guard nearby did looked like a move straight out of an NFL playbook.

The child was placed on the table again before he was handed over to his mother.

For Grzegorz Paczek, the guard who saved the boy, throwing himself on the ground to catch the boy was instinct.

“I don’t feel I’ve done anything heroic,” he told the Telegraph. “I’m just glad the child wasn’t hurt. He started to cry when I caught him but his mother soon calmed him down.”

An airport spokesman noted that if the child had suffered any injuries from the fall, he would have been examined to see if he was able to fly.