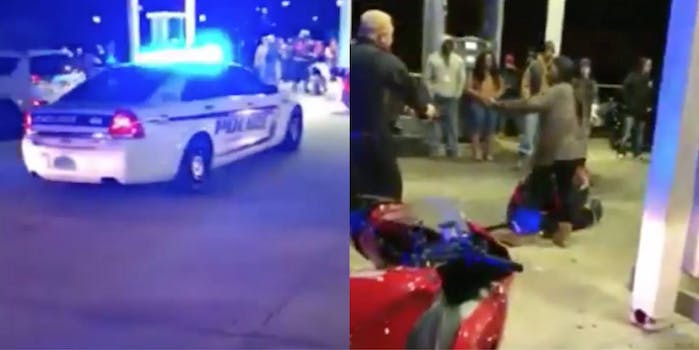 At least she said yes?

One Mobile, Alabama, couple’s wedding proposal is going viral, but not for the ring’s presentation, a flashmob routine, or any other typical proposal elements.

On Friday, 33-year-old Daiwon McPherson proposed to his girlfriend of five years, Shawna Blackmon, in the form of a fake arrest planned with the help of local police.

In the clip, a cop car pulls up to a gas station and two cops step into the frame, ordering McPherson to get on the ground. They point their handguns at him as Blackmon steps in between him and the police, saying, “I’m his wife.” The male police officer orders her to get McPherson’s gun, to which she says she will, and tells the cops to back up.

With the cops still pointing their weapons at the couple, McPherson takes the ring box out of the pocket and holds it up to Blackmon, the crowd around them clapping and cheering. Blackmon, now in tears, backs herself up into the two cops and they lower their weapons. The female cop says, “I guess you’re not his wife just yet!”

The original video of the proposal received just over 11,000 views on the Instagram of New York rapper Lil Haiti before getting picked up by the Shade Room and garnering 1.3 million views.

McPherson told AL.com that he staged the proposal with the help of police in order to surprise his 28-year-old girlfriend.

After McPherson, a member of the Mobile biker community, never showed to dinner and drinks with Blackmon, she received a call with the message that he was running from the cops while in possession of a gun and needed Blackmon to drive downtown so he could jump in her car.

Blackmon told the Shade Room that so many emotions ran through her head, but she just wanted to protect McPherson. And yes, she accepted the proposal despite being emotionally shaken throughout the ordeal.

“I was going through so many emotions from being mad at him to being scared something happened to him pulling up… All I knew is that I needed to protect him no matter what… I’ve always been that way about him…always tryna protect him and fix everything,” she said.

Regardless of the romanticism behind McPherson’s proposal, the video is extremely bizarre. In the past three years, many videos involving police altercations with black civilians have gone viral for their depictions of police brutality, including the tragic deaths of Eric Garner, Philando Castile, Alton Sterling, and Tamir Rice.

Even this summer’s most notorious and well-intentioned of viral police gag, where cops pulled over people just to hand them ice cream, seemed tactless and manipulative in light of recent events; many accused the police in the video of purposely scaring law-abiding civilians just to show they can engage positively with their communities.

So it’s understandable how critics were mixed on how to perceive the proposal. Some commenters found the video romantic and telling of how much Blackmon cared for McPherson, while others felt it was a humorless joke that made light of actual deaths at the hands of police. 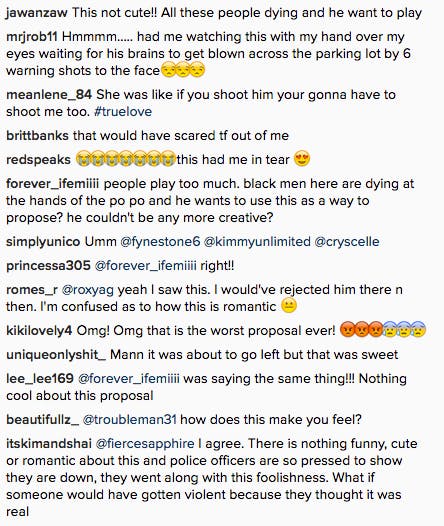 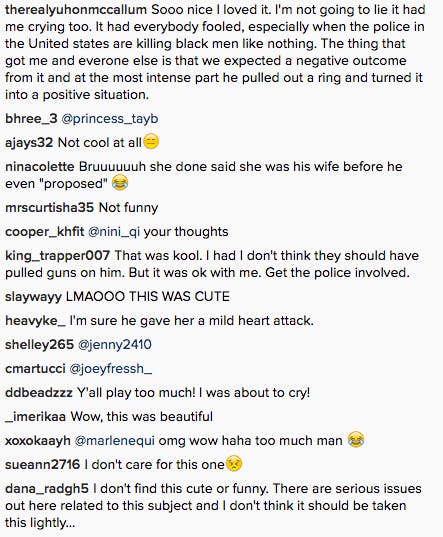 However, McPherson told AL.com that he wanted the video to go viral  to show an instance of police working with the community for a positive outcome. He had spoken to Mobile police earlier that day to arrange the proposal and the cops were for it, informing all officers on duty before making the fake call that evening.

“I really wanted to bring the bike life and the police together,” McPherson said. “I can’t believe I actually pulled this off.”