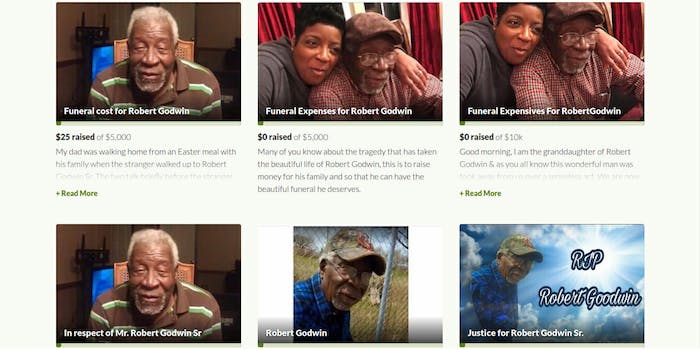 Over 35 GoFundMe accounts have been created, according to reports.

Cleveland police and authorities nationwide are searching for Steve Stephens, a man who is suspected of shooting and killing 74-year-old Robert Godwin, a grandfather of 13. Godwin was walking in northeast Cleveland when Stephens shot and killed Godwin, later posting the murder on Facebook.

Since then, various GoFundMe accounts have popped up, claiming to be hosting fundraisers on behalf of Godwin. But Godwin’s family is insisting that these are fake, according to a report by FOX 8.

Godwin’s daughter, Tonya Godwin-Baines, said no family members have created a GoFundMe account for Robert Godwin. No outside parties have been authorized to create one on behalf of the family, either, meaning any fundraisers posted in the name of Godwin are unauthorized.

FOX 8 reports that 35 accounts have been created. Many more can be seen on GoFundMe by searching “Robert Godwin.” Some of the fundraisers feature family photos and photoshopped edits that appear realistic or plausible.

This incident raises further questions about vetting fundraisers with the site, and if and when families are notified when campaigns are set up in their name.

Update, 12:37pm CT, April 17: GoFundMe told the Daily Dot, “It’s not uncommon for someone to create a GoFundMe to help another individual after a news report. We have spoken with the GoFundMe campaign organizer, members of the family, and local authorities. We’ll guarantee the money will be deposited directly into the family’s bank account.”
If you’re uncertain where to donate, GoFundMe is directing everyone to this campaign, which will be transferred to the family.
GoFundMe further explains why there are so many accounts: “As with any event, there may be multiple people who want to help… It’s important to remember that our platform is backed by the GoFundMe Guarantee, which means funds are guaranteed to go to the right place.”
Editor’s Note: The headline and last paragraph have been changed to reflect GoFundMe’s comment.