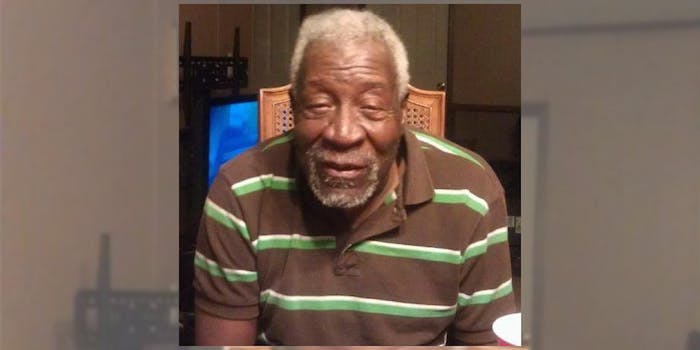 Police hunt for man who broadcast murder on Facebook

Steve Stephens is accused of filming the murder of a stranger in Cleveland and broadcasting the video on Facebook.

Police across the Northeast and Midwest are currently hunting for Steve Stephens, a man accused of broadcasting himself shooting a man on Facebook.

An arrest warrant was issued for Stephens for the murder of Robert Godwin, who police say was a complete stranger.

In the video, which was uploaded to Facebook, Stephens approaches Godwin, a 74-year-old grandfather of 13 who was walking down the street in northeast Cleveland, and asks him to say the name, “Joy Lane.” When Godwin repeats the name, Stephens responds that she is the reason “this is about to happen to you.”

Godwin then began pleading when apparently, though is not shown, Stephens draws a weapon. He then shoots Godwin, before filming his body.

“That motherfucker dead ’cause of you, Joy,” Stephens said.

Police say the suspect then used Facebook Live, which allows users to uploaded prerecorded video, to broadcast the shooting.

On his Facebook page, which has since been locked down, NBC reports he bragged about killing 12 others, before increasing that number to 15.

“In a series of posts Sunday on what authorities said was Stephens’ Facebook page complained that he had ‘lost everything’ to gambling. The posts named specific people whom the user wanted to talk to, and at one point he wrote ‘I killed 12 people today’ and wouldn’t stop until he could speak to his mother and a second woman.

“Later, the user posted: ‘I killed 15 today because of [the second woman].’ The user called it his ‘Easter day slaughter.’”

Police in Cleveland say that they are aware of no other victims.

Speaking to Cleveland.com, Godwin’s son, Robert Godwin Jr., said that he had not seen the video.

“I haven’t even looked at my cellphone or the news. I don’t really want to see it.”

The social media sharing of the killing is similar to the shooting in August 2015 of Alison Parker and Adam Ward, two employees at a CBS affiliate in southwest Virginia by Vester Lee Flanagan II. Flanagan committed suicide after a statewide manhunt.

Stephens is believed to be driving a white Ford Fusion and may have fled the state. The FBI is assisting in the hunt for Stephens, and authorities said he could be anywhere from Michigan or Indiana to New York or Pennsylvania.

Update 8:41am CT: Cleveland police have stated that a series of GoFundMe pages purportedly made in the name of Godwin for his family are illegitimate.