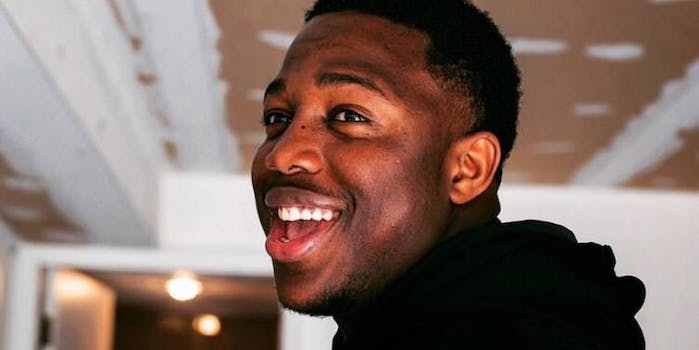 University of Iowa's Faith Ekakitie had been mistaken for a robbery suspect.

Faith Ekakitie, a defensive lineman for the University of Iowa, was playing Pokémon Go in an Iowa City park when police officers pulled their guns on him last week.

Today I was surrounded and searched by approximately five Iowa City Police Officers. My pockets were checked, my backpack was opened up and searched carefully, and I was asked to lift up my shirt while they searched my waistband. Not once did they identify themselves to me as Iowa City Police officers, but with four gun barrels staring me in the face, I wouldn’t dare question the authority of the men and woman in front of me. This is what happened from my point of view.

But he also tempered his remarks by writing that, from the officers’ point of view, the situation was vastly different—and that a bank nearby had just been robbed.

From the police officers point of view, all they knew was that a bank had just been robbed less than ten minutes ago. The suspect was a large black male, wearing all black, with something on top of his head and the suspect is armed. As they drive past an Iowa City park that was less than 3 minutes away from the bank that was just robbed, they notice a large black man, dressed in all black, with black goggles on his head. They quickly move to action and identify themselves as the Iowa City police and ask me to turn around and place my hands up. I do not comply, they ask again, and again no response from me. So they all draw their guns and begin to slowly approach the suspect.

Sgt. Jorey Bailey of the Iowa City Police told the Des Moines Register that the park was only a block away from where the robbery occurred and that Ekakitie fit the description of the suspect.

“I don’t think race played a factor in this, nor does it in circumstances like this because of the detailed description, the location given by the person and the short time span in which this all occurred,” Bailey said.

Ekakitie took the incident in stride, noting that he was happy to be alive. He also ended his post by thanking the police and encouraging people to unlearn prejudice. The post now has over 5,000 likes and over 3,000 shares.