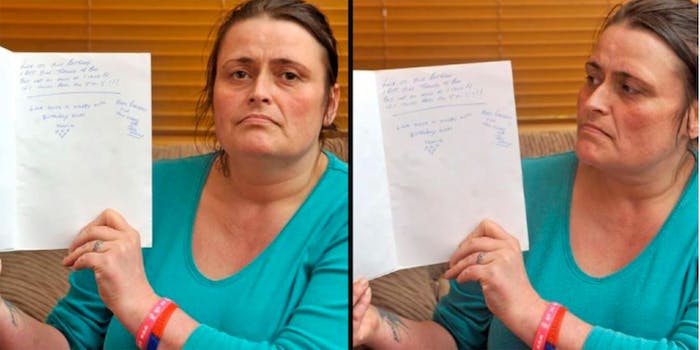 He wrote a poem about her breasts.

A biscuit factory worker in the U.K. just won £10,000 ($13,193) in compensation after her boss wrote a rhyme about her breasts in her birthday card.

Lisa Turner received the card after it had been passed around the office to be signed by fellow employees, according to the Sun. The sales admin manager, Dave Ravenscroft, left this little poem for Turner:

“Lisa it’s your birthday, I bet you’re thrilled to bits, but not as much as I would be if I could feel your TxxS!!!”

Turner said during the trial that Ravenscroft’s comments on her birthday were just one example of how he sexually harassed subordinates at the factory. Other factory workers also testified that he was inappropriate in the workplace.

Ravenscroft, on the other hand, said he didn’t think his comments were sexist and was under the impression his employees didn’t mind because they joined in the banter.

Turner said she would have ignored the manager’s comments, but when she caught him “leering” at her 17-year-old daughter, she felt he crossed the line.

“I can’t believe he got away with it for so long. It was when he made the remark about my daughter, it was the last straw,” she said. “I didn’t find it funny. Fair enough I had to put up with it, him going on about my boobs and everything, but my child doesn’t.”

Turner, now 42, won her case for “injury of feelings.” The court, however, rejected her claims of victimization, constructive unfair dismissal, and racism.