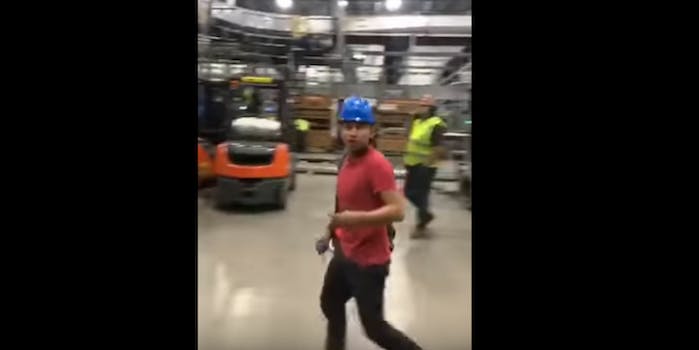 ‘We rise together, homie.’

It was the Communist philosopher Karl Marx who popularized the philosophy behind “seize the means of production,” but Marx never met Antoine Dangerfield, who coined his own philosophy of “shut this motherfucker down.”

In a resounding example of worker solidarity, more than 100 construction workers at an in-progress UPS facility in Indianapolis walked off the job after some of their co-workers were fired by a boss they say was racist.

Employee Antoine Dangerfield caught the walk-off on camera, adding his own enthusiastic narration as his coworkers began to file out and make comments toward his camera phone.

“Who do y’all think you’re playing with?” Dangerfield can be heard laughing on the recording. “This is what Black people need to be on….They thought they were going to play with these amigos and they said, ‘We rise together, homie.’”

Dangerfield continued the video by cutting to footage of a now-empty facility, remarking at the sudden quietness, and continuing to crack jokes.

In an interview with Jacobin magazine, Dangerfield said he was fired over the video but was offered $250 to delete it. By then, though, the video had become too viral.

“It was life-changing to me to see that happen,” Dangerfield told Jacobin magazine. “Because it was like, dang, they really came together. And that’s why I’m not mad about the video, about getting fired. Because it’s 5 million people who saw that. And it might change their view on things. Empowering people.”

Dangerfield, who is Black and whose coworkers appeared to be largely Latinos, said he feels the Black community could learn from this example.

“I think Black people are moving in the right direction,” Dangerfield said. “We were down for a minute with the crack era. And you see the news, a lot of killings in the Black community. Sometimes we don’t come together. But if they can do it, we can do it. And we can all come together. There’s power in numbers.”

America has always had a history of contention between employees and their bosses, but seeing a sudden strike or a walk-off firsthand isn’t something that was necessarily possible before the age of smartphones.