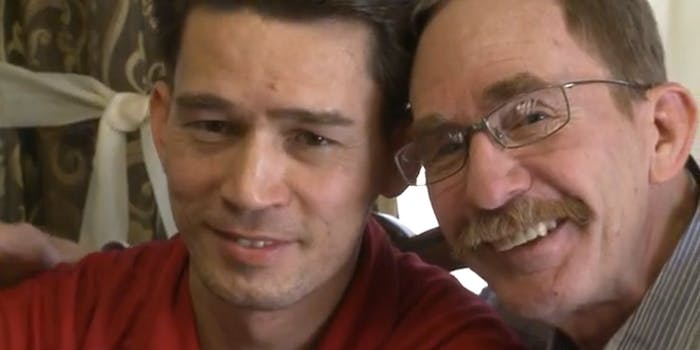 More than 40 years later, a man meets his son.

Even in the midst of war, some people find love.

Such was the case for some U.S. soldiers who formed relationships with Vietnamese women during the Vietnam War. Some of these relationships resulted in children, but when the U.S. pulled out of the conflict, many soldiers had to leave everything behind and return to America.

One of these soldiers, Jerry Quinn, left his girlfriend and son when he was ordered to leave Vietnam. Quinn had been trying to marry his pregnant Vietnamese girlfriend when he was ordered to leave the country. Although he said he tried to stay in touch, Quinn never discovered what became of his fiancee and their child. Decades later, Quinn decided to try to locate his child, and went to Ho Chi Minh City in search of the boy he left behind in 1973. The BBC followed Quinn’s quest to find his son for a documentary segment. They started filming in December, helping Quinn travel to Vietnam.

He went back to the apartment he shared with his girlfriend (whom he called Brandy), but his trip to Ho Chi Minh City didn’t give him any new leads. All he had to go on was a few photographs sent by Brandy shortly after he left, one showing her, one showing her holding their baby son, and one showing her with another woman. A woman was able to identify Brandy by her name in Vietnamese, she told Quinn that all evidence that linked children to American fathers was destroyed when the Viet Cong entered the city. Quinn eventually tracked down Brandy and visited her in January, but she didn’t know the whereabouts of their son.

Quinn left Vietnam defeated. Had he lost his son forever? He posted to Facebook out of desperation, sharing the old photos he’d held onto and asking if anyone knew a 40-year-old with the surname Bui. The photos were shared on the social network, but no one in Vietnam came forward.

However, in Albuquerque, N.M., a man named Gary Bui ‘liked’ Quinn’s post, which had been shared on a friend’s account. “Keep searching,” he wrote. And then he kept thinking about the post. He realized he recognized the photographs the man shared. They were the same ones he had been given.

When Gary Bui was a baby, Brandy had left him to flee from the Viet Cong, because she feared the repercussions of having a child with an enemy soldier. Bui first lived with Brandy’s friends in a jungle hut, hiding from the Viet Cong. Then he lived in an orphanage. Then, he was airlifted to the U.S. as part of a program developed to help the children of U.S. soldiers in Vietnam. Around 26,000 children of Vietnamese mothers and U.S. soldier fathers were relocated to the U.S., but only 3 percent located their fathers. Bui grew up with foster parents, but kept copies of the same pictures Quinn clung to as his only mementos of his lost Vietnamese family.

Bui and Quinn have now, finally, met each other. Although Quinn lives in Taiwan and Bui lives in the U.S., they intend to maintain a relationship.

Quinn keeps his Facebook updated with posts about Bui. “Gary Bui is an awesome son,” he wrote in March. “I’m so blessed to have him FINALLY in my life!”

This outcome is rare for Amerasians searching for their biological families, but it underlines how the social web can make tracking down lost relatives far easier than it was in the past. In March, a woman known as the ‘Burger King baby’ who had been abandoned by her mother 27 years previously found her birth mother by posting a plea to Facebook. Her birth mother told her that she’d been raped at age 16 and hid the pregnancy from her parents, and the two now say they intend to have a relationship as well.