If it's on Facebook, it must be true, right?

Dave Cicirelli, an art director from New York City, posted on his Facebook profile in late 2009 that his life was at a standstill and something desperately needed to change. He announced his decision to quit his job and hitchhike across country, taking his laptop and cellphone to document his journey. Along the way, he fell in love with an Amish woman, joined a doomsday cult, got stranded in Mexico, and got inked up with a bowtie tattoo.

As with most things that sound too good to be true are, Cicirelli’s story was completely fake—an elaborate scheme played out on Facebook with the help of Photoshop. In his new book Fakebook, Cicirelli tells the story of his six-month hoax that fooled more people than he ever thought it could.

At the time of his experiment, Facebook had been going through a major shift. Social games like Farmville began overloading users with requests, and more business pages were pushing content to users’ newsfeeds—changes that contributed to the loss of Facebook’s personal touch. Friends started to feel like they were competing for attention.

“It occurred to me that I don’t know if any [on Facebook] is true,” Cicirelli told the Daily Dot. “It is kind of run on the honor system.”

Naturally inclined to cause mischief, Cicirelli, now 30, set out with the simple challenge of seeing how ridiculous he could be on Facebook while still fooling his friends. His first stop: Amish Country. 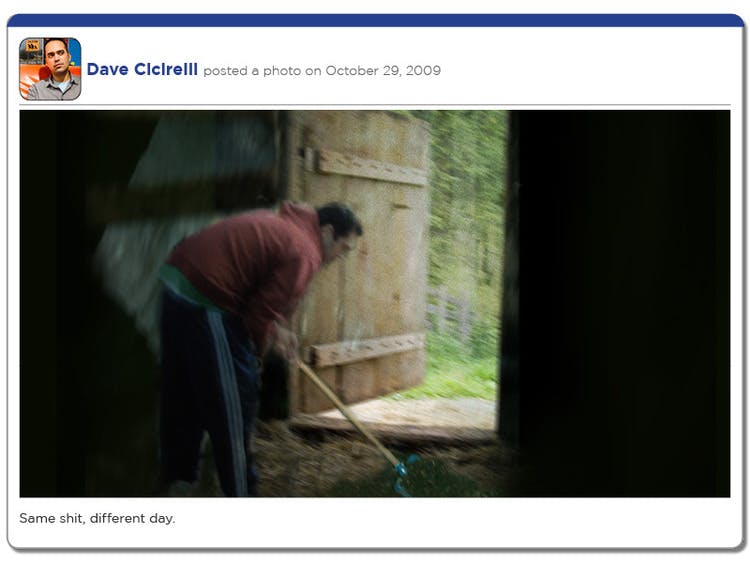 Posting about two or three times a day, Cicirelli said that manipulating photographs proved challenging because of the unpredictability of the weather and normal day-to-day time constraints. Despite his humorously shoddy Photoshop work, he said people were buying into the story.

“People just wanted it to be true,” he said. “I really believe that.”

As his online journey continued, the story got stranger, and people became more invested in Cicirelli’s life. He added over 100 new followers to his original 500, and comments on his page ranged from encouragement to concern for his well-being. He said that he felt pressure to post regularly because followers became worried if he missed a day.

And his story just got weird. 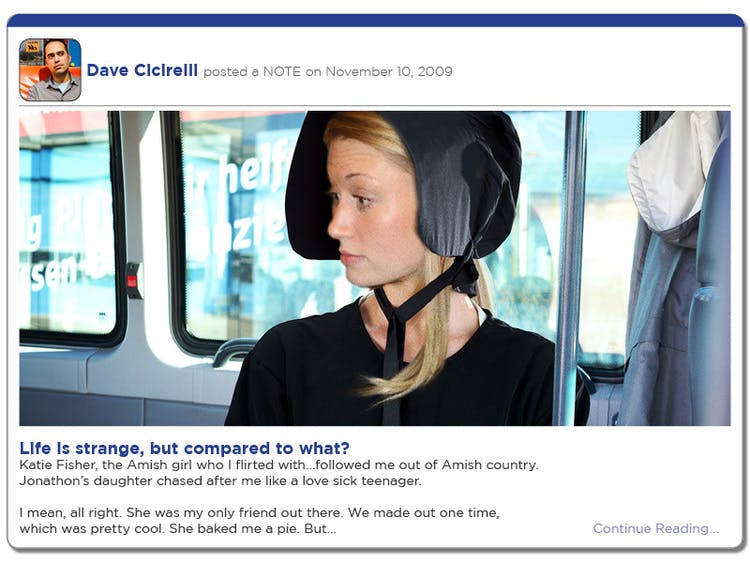 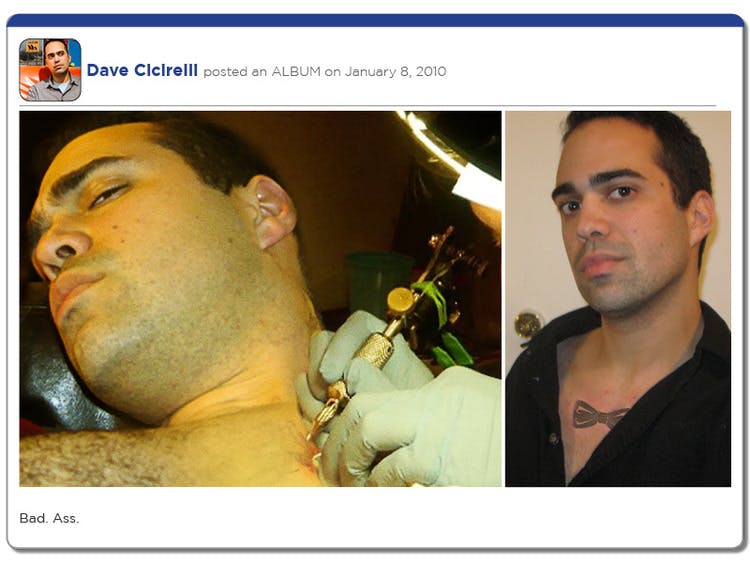 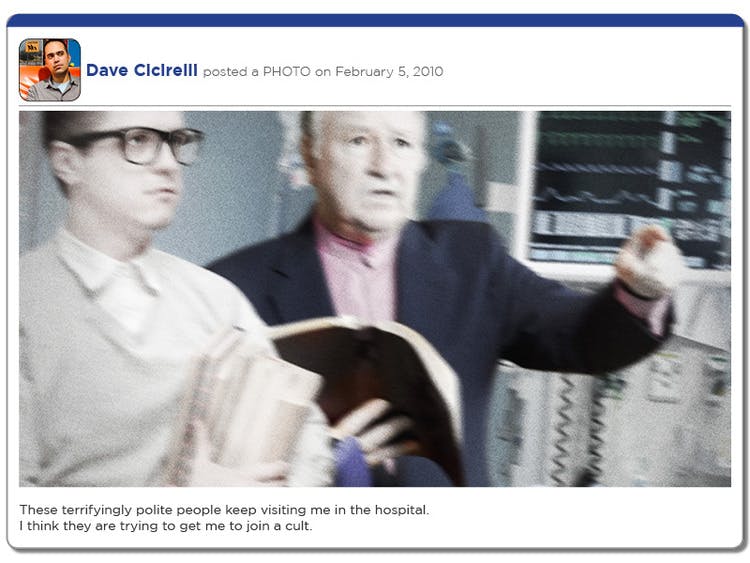 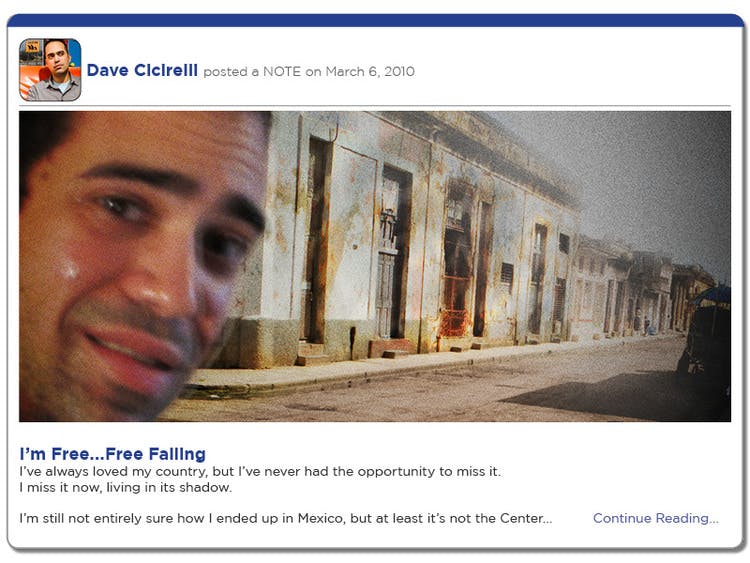 Cicirelli had began doing what now is commonly known at “catfishing,” a term derived from the 2010 documentary Catfish, where filmmaker Nev Schulman was fooled in an online relationship with someone who he thought was a beautiful, young musician from Michigan. His online crush turned out to be a middle-aged woman who ran multiple fake Facebook profiles with a cast of her own made-up characters.

The popularity of the film has since paved the way for a reality TV show by the same name, where Schulman helps others through their own catfishing nightmares.

Although he fooled many of his Facebook friends and others who began following his story, his experiment wasn’t without hiccups. Cicirelli said avoiding his Facebook friends in real life was a challenge, especially on holidays when he would head back to his hometown. He recalled a time when at home for Thanksgiving he was at home with his mom watching Jeopardy in his parents basement while only a couple blocks away, believers of his online fantasy were celebrating at a local bar.

One person found out about Cicirelli’s prank and instead of outright exposing him, the mystery follower began sending creepy messages and real-world trinkets—like a bouquet of flowers from his pretend Amish girlfriend.

What stood out to Cicirelli the most from his journey was the outpouring from other Facebook friends who shared similar feelings of wanting to leave their real-world job behind and travel the country. He said dozens of people, many of whom he had never met, would send him messages about their own plans for escaping the drag of the 9-to-5 world. And one woman actually did follow in his footsteps, or so she thought.

Cicirelli said that he received a message from a woman who was so inspired by his tale, she quit her job and moved from New York City to Portland, Ore., on a whim.

“That was the worst day of my life—finding out that some woman was basing her life decision on a practical joke,” he said.

In the end, Cicirelli decided to end his fraudulent journey six months after it began. His virtual self had gone through a lot, but Cicirelli had proven what he set out to see. How much would people believe of an insane, unbelievable tale if it was posted on Facebook?