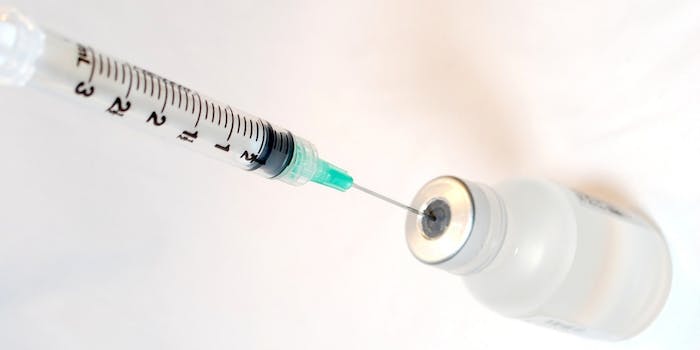 Pox parties need to stay in the past.

When I was 11, I missed two weeks of fifth grade because I had the chickenpox. Apparently, my school district didn’t require students my age to get the vaccine.

I don’t remember much of my time couch-ridden, but it was interspersed with fits of unconsolable itching, oatmeal baths, bottles of lotion, and going to the ER at least once because of severe abdomen cramps somehow related to the chickenpox. To this day, 14 years later, I still have a crop circle of a welt over my left eyebrow. People have told me they were afraid to ask what it was.

Which is why when I read that anti-vaccination parents are attempting to give their kids the chickenpox as a means of protecting them from the virus as adults, without giving them the vaccine, which does exactly that, my eyes rolled into the back of my skull, and never rolled back out.

According to Quartz, Facebook pages of anti-vaxxer communities are seeing parents organizing “old-school ‘pox parties'” as a means of “vaccinating” their children without giving them the vaccination. The practice used to be common, until a vaccine for the disease became available in the 1990s. But that hasn’t stopped science-denying parents from attempting to arrange pox play dates to infect their children with the virus, which can be deadly.

Quartz mentioned one post in an “alternative-health” group, which read, “Could you help me with advice about relieving the symptoms of Chicken pox [sic]? Here in the US [chickenpox] vaccine is the norm so we have secret pox parties for our kiddos. I’m going to my first one tomorrow so want to get prepared.”

Quartz pointed out that Facebook has long-battled this small but vocal community of people who think that vaccinations are a detriment to a child’s health. According to a new working paper by the National Bureau of Economic Research, Facebook groups are like “anti-vaccination echo-chambers” in how posters share incorrect information about vaccines, then share that information outside the groups.

Facebook has told Quartz that this misleading information doesn’t go against the site’s community guidelines, but that “health-related content” on a newsfeed can be fact-checked and declared false. This doesn’t apply to the Facebook groups, though the bureau report stated that Facebook’s banning of advertisements from fake news websites resulted in a dramatic drop of anti-vax content sharing.

But, ultimately, where Facebook fails to take responsibility, it is up to parents to wake the fuck up and stop treating their children’s schools as a charcuterie board of viruses. When you don’t vaccinate your kids, you’re putting all other kids at risk of contracting an easily-preventable virus, even if those kids are vaccinated themselves.

In North Carolina, a private school has been hit with the largest outbreak of chickenpox in the state in 20 years, with at least 36 known cases of the virus. The school, Asheville Waldorf, had the third highest rate of religious exemptions of any school in the state for the 2017-2018 school year.