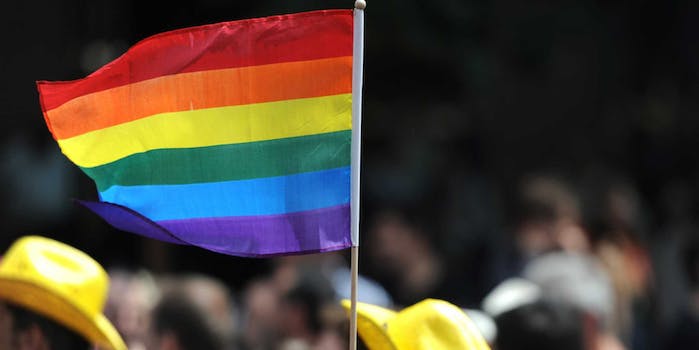 70 percent of U.S. Facebook users have a gay friend

Is this more evidence that American society has reached a tipping point in accepting the LGBT community?

About 70 percent of Facebook users are friends with someone who’s identified as gay, lesbian, or bisexual, according to the company’s data team. The news comes in the middle of gay pride month, and just days before the Supreme Court drops its eagerly awaited ruling on same sex marriage.

That number neatly complements a recent Pew report that found 87 percent of Americans know someone who is gay, lesbian, or transgender (part of the discrepancy in those numbers may be due to the fact that not every American has a Facebook account). And while neither Facebook’s nor Pew’s numbers say a thing about the quality or type of that relationship–simply knowing someone is very different than being their friend, especially on Facebook–the numbers do hint at a broader shift in the greater public’s acceptance of the LGBT community, even though simply knowing an LGBT person does not equate to support for marriage equality.

In 1993, only 61 percent of Americans said they personally knew an LGBT person. One likely reason why that number has jumped so high is that it may be easier, in a general sense, to come out to friends and family now than it was in 20 years ago.

And that means greater success at the polls. As the Wall Street Journal put it:

It’s a notable statistic, because gay-rights groups say some of their recent successes at the ballot — after years of losing there — can be tied with a kind of tipping point Americans have reached in being comfortable with gay and lesbian friends and family.

Here’s another number that suggests this “tipping point” is very real: 72 percent of respondents in that Pew survey said that legal recognition of same-sex marriage is “inevitable.”