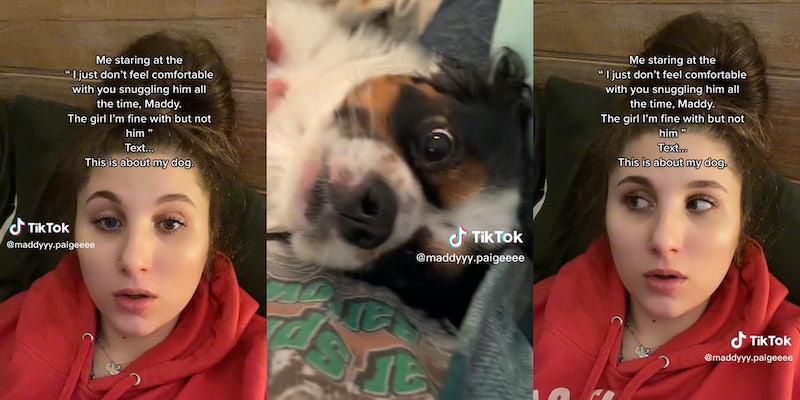 ‘It’s so sad’: Woman says ex got jealous of her cuddling with her male dog

'I would never ever do anything with my dog.'

A TikToker says that her ex-boyfriend became jealous of the affection she was giving her male dog. Commenters on her video shared similarly ridiculous experiences with exes.

In a TikTok posted on Monday, Maddy (@maddyyy.paigeeee) says that her ex-boyfriend texted her, “I just don’t feel comfortable with you snuggling him all the time,” about her male dog. He also said that he would be “fine” with her snuggling a female dog.

every time ive used this sound its about the same person😎

In a TikTok message to the Daily Dot, Maddy explained that she is no longer in a relationship with the man and that they dated when he was 18 and she was 14.

She says that she received the text message from her ex after she sent him a photo of her and her male dog. Her boyfriend said he was especially uncomfortable with her dog “being so close to [her] crotch.”

“I was mad,” Maddy told the Daily Dot. “I was asking him if he thought I had a thing for animals because I would never ever do anything with my dog.”

In the end, Maddy says she told her then-boyfriend that she would “limit” the time she spent with her male dog.

“At the time that seemed like the right answer to make him happy,” Maddy said. “Looking back, it’s so sad. I of course didn’t limit my time, I just never told him about it anymore.”

In a TikTok comment, Maddy wrote that her ex was also jealous of her relationship with her father.

Commenters on her video related and recounted horror stories of exes who were jealous of their pets and male family members.

“My ex was jealous of my male cat and male rabbit,” @gerard_ways_hamster wrote.

“My ex said this in person to me about my younger brother falling asleep on me during a family camping trip,” @scruffyscoundrel commented.

And though many of the commenters seemed to be able to laugh at their experiences, others said they felt seen by Maddy’s video.