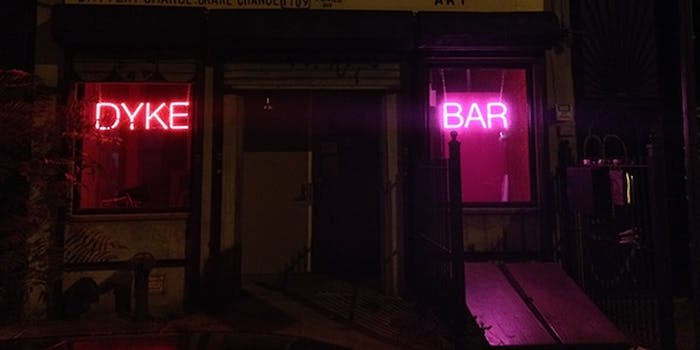 Lesbian bars are nearly extinct and this is their eulogy

Lesbian bars are going extinct. But you can livestream this eulogy and say a proper goodbye.

Tonight, artist Macon Reed’s installation Eulogy for a Dyke Bar closes with a final performance. But the event is expected to draw so many people, the gallery not only had to split it into two time slots—they’re also livestreaming the entire show.

Why so popular? Because for the past couple of years, lesbian bars across the nation have essentially been threatened with extinction. One after another, the traditional strongholds of queer-girl culture have shuttered, closing doors on an IRL center of dyke-on-dyke fun times in deference to an increasingly-online community.

San Francisco said sayonara to its last remaining lesbian bar this year, and lady-centered clubs around the country have followed suit. Replacing the bars is a strong sense of anxious nostalgia, featured in documentaries [full disclosure: this author helped produce the documentary linked] that trace the disappearing culture and blogs like Lost Womyn’s Space that archive lesbian locales as they slowly fade into memory.

Sadness over the loss of lesbian-specific venues has coalesced into the popularity of Eulogy—with nearly 1,000 people signed up on the event’s Facebook event page and expected to try and cram into the small Brooklyn gallery Wayfarers, which has a roughly 70-person capacity, tonight. In an interview conducted this summer, which was sent to the Daily Dot, Reed and Wayfarers curator George Ferrandi discussed the inspiration behind Eulogy for a Dyke Bar.

an end,” said Reed. “When I was in my early twenties, people around me were really making a lot of

room for transmasculine folks and with good but eventually clearly problematic

intentions, the words ‘lesbian’ and ‘dyke’ were almost taboo. They’re coming back now

and in a more expansive way.”

Reed pointed out that she lived in Chicago, where the gayborhood is called “Boystown” and stands as a perfect example of how gay men’s communities (bars, clubs, even hookup apps) are thriving while spaces for queer women are dying out.

“[Eulogy] is more of a historic exhibit, the way one would see at a museum, of something that doesn’t exist anymore. This asks viewers to contend with the bar closings and the

idea of this culture being something in the past,” Reed told Ferrandi in the gallery interview. “As in, ‘dyke bars were these things that

people had for several generations in the past and now are just cultural artifacts.'”

The installation room is crafted to look like a scrappy lesbian bar from times past, with a wall of archival images from various periods. Reed spent time digging through photos and event flyers at Brooklyn’s Lesbian Herstory Archives as well as two web-based archival projects. One of those, the Lexington Club Archival Project, celebrates and mourns San Francisco’s last surviving lesbian bar, which closed this year. Another hosts archival materials from New Orleans lesbian bars past at the Last Call NOLA site.

At Friday’s closing event, Reed will present a series of performers from the group Queer Memoir, New York’s longest-running LGBT storytelling project. Because the event is expected to be overcrowded past capacity, a second venue (Brooklyn queer space The Spectrum) is hosting a screening of the livestream that is also accessible online.

Reed told Ferrandi the show was dedicated to “all the queer women who fought hard for these spaces to exist, who had to sneak around

in dark streets to find dyke bars and go into them unseen, to the women and feminists

who worked to make things more safe and accessible today, and the brave trans* women

who have struggled to be seen and feel welcome in dyke spaces.”