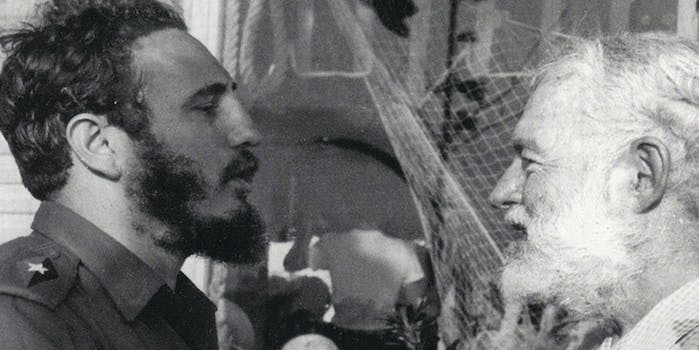 Feast your eyes—and your mouth—on Papa's hamburger concoction of choice.

“Then there was the bad weather. It would come in one day when the fall was over. We would have to shut the windows in the night against the rain and the cold wind would strip the leaves from the trees in the Place Contrescarpe.” – Ernest Hemingway, A Moveable Feast

These were the words that came to my mind when I realized where we were. We had walked up the rue Cardinal Lemoine and I said to my wife, good grief, this is one of the streets where Hemingway lived. Then we came into the Place Contrescarpe and the first words of his memoir, A Moveable Feast came to mind.

I realized I’d meant to bring my copy. We had been through a six week odyssey through the last 60 years of European and family history and two weeks with nothing to do but walk around the city of Paris together was our reward. On the other side of Contrescarpe, on what Hemingway slangily called the rue Mouff’, was a bookstore and there I picked up a Faber copy of the book.

Look, you either love Hemingway, for all his faults (which were legion), or you don’t. I do. So when I heard that among the two thousand recently digitized personal papers being sent from the writer’s Finca Vigía home in Cuba to the John F. Kennedy Presidential Library and Museum in Boston was a recipe for Hemingway’s hamburger, I was curious. Not because I am a cook. Before I married, I could make chicken alfredo and Greek salad. I can now do neither. But every man, no matter how old fashioned or new fangled, believes one thing he can do is make a hamburger. After all, something something barbeque.

To my surprise, given the frightening legacy of my mother’s old Betty Crocker cookbooks (the post-war period in America was known primarily as the age of putting mayonnaise where it was forbidden by God himself to go), it sounds great.

Cheryl Lu-Lien Tan, writing in The Paris Review, the magazine begun by George Plimpton and Peter Matthiessen and Doc Hume in 1953, dug through the digitized records and found the recipe as a set of instructions to Hemingway’s service staff while he was living in Cuba, between 1939 and 1960 (and where he wrote A Moveable Feast, among other books).

To put it mildly, Hemingway was not indifferent to food. Among the load of documents (the first was full of galley proofs and other items of scholarly interest, the second of documents like recipes and bills that to some, me for interest, give a better sense of the man than the writer, if those could be separated anyway), were instructions on avocados (don’t serve them with other vegetables) and milk (just for the cats), orders for cans of of guinea hen, pheasant, cèpes, lobster bisque, and rose petal jelly, a recipe for soup that includes “abalone, bean curd, smoked turkey, clam broth, onion, and shredded lettuce” and, of course, the hamburger recipe.

And here it is, as abstracted from Hemingway’s writing by Ms. Tan and presented in recognizably modern recipe format.

The two primarily weirdnesses to me were “Indian relish” and Spice Islands’ “Mei Yin” powder. Indian relish is just relish, but with pickled cucumber, onion, and cabbage and apparently fairly easy to find. The Spice Islands company doesn’t make this “Mei Yin” powder anymore. It is a grotesque Frankenstein of sugar, salt and – my hand to God – MSG.  Tan explains how to make it. She doesn’t explain how to keep from shuddering while doing so.

If you make Hemingway’s recipe, do have the common sense, decency, and self respect to post an account of your experiment below, won’t you? Oh, do.

Incidentally, and apropos of nothing, here are my favorite lines from A Moveable Feast. I had the good fortune to perform this chapter of the book on stage with Gary Schartz (not incidentally, a celebrated North Carolina meat weirdo.)

“That’s Hilaire Belloc,’ I said to my friend. “Ford was here this afternoon and cut him dead.”

“Don’t be a silly ass,” my friend said. “That’s Aleister Crowley, the diabolist. He’s supposed to be the wickedest man in the world.”