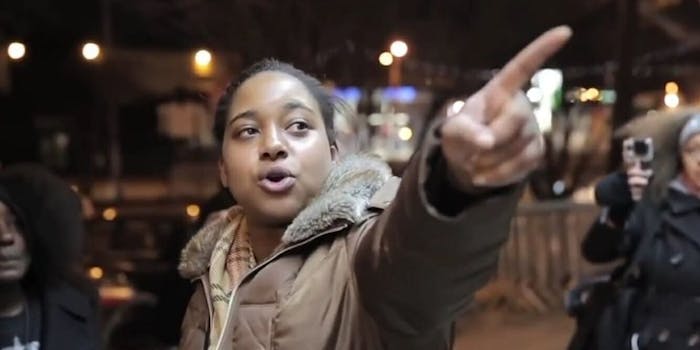 'She only pursued right, no matter what.'

Days after suffering a massive heart attack that reportedly left her on life support, Erica Garner died Saturday morning, according to multiple media reports and her official Twitter account.

Garner—the 27-year-old who became a Black Lives Matter activist when her father, Eric Garner, died after being put in a chokehold by New York Police Department officers in 2014—suffered a heart attack last week that reportedly was brought on by an asthma attack. She’d been in a coma ever since.

She passed away this morning. The reports are real. We didn't deserve her.

Erica the world loves you. I love you. I am glad you came into our lives. May you find the peace in the next life that you deserved while you were here. I will always love you my sister. love you

When you report this you remember she was human: mother, daughter, sister, aunt. Her heart was bigger than the world. It really really was. She cared when most people wouldn't have. She was good. She only pursued right, no matter what. No one gave her justice.

Eric Garner died in 2014 after police confronted him about allegedly selling loose cigarettes in Staten Island. He was taken down by officers, and during the scuffle, he said, “I can’t breathe” 11 times. He later died at the hospital, and though no officers were indicted in the incident, a wrongful-death lawsuit by the Garner family against the city of New York was settled for $5.9 million.

Erica Garner became an activist for police reform and endorsed Bernie Sanders for president. She gave birth to a boy in August, where she suffered her first heart attack. Doctors later found she had an enlarged heart.

She then suffered another heart attack last week that left her with brain damage.

Update: Cat scan shows Erica suffered major brain damage from a lack of oxygen while in cardiac arrest. Please continue to pray hard for Erica and pray for her family and kids just as much.

“She was a warrior, she was a fighter and we didn’t pull the plug on her,” Esaw Snipes, Garner’s mother, told the New York Daily News. “She left on her own terms.”