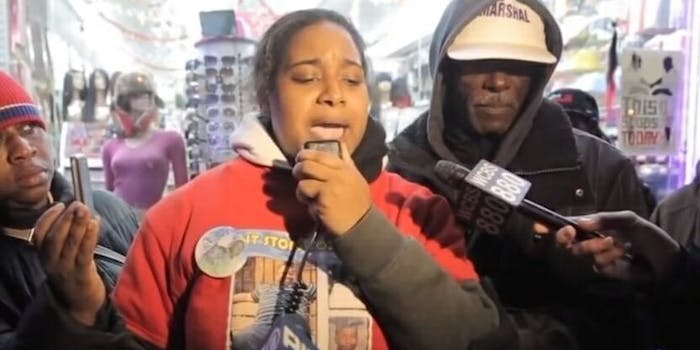 She went into a coma on Saturday.

Erica Garner, the 27-year-old daughter of the man who died after being choked by New York police, is brain-dead after suffering a massive heart attack, according to the New York Daily News.

Garner suffered an asthma attack, which reportedly led to the heart attack, and has been in a coma since Saturday. Garner became a Black Lives Matter activist when her father, Eric Garner, died soon after an officer put him in a chokehold in 2014.

According to the newspaper, doctors have said Erica Garner has no chance of recovery. Her mother, Esaw Snipes, said Thursday that Garner is on life support.

“She’s not gone, she’s brain-dead,” Snipes said. “Physically she is still with us.”

Garner’s official Twitter account seems to have a slightly more optimistic point of view and says the Daily News report is not factual.

Update: Cat scan shows Erica suffered major brain damage from a lack of oxygen while in cardiac arrest. Please continue to pray hard for Erica and pray for her family and kids just as much.

I know that the @NYDailyNews didn't get their information from anyone that heard it straight from a doctors mouth because only one person was in the room when the results were read. That person was me. I called each family member. So they are reporting 3 person hearsay.

I just visited the hospital to see Erica Garner and family.

She has not passed away.

She does have limited brain function but doctors say they see some activity. Her condition is no doubt critical, but the family was encouraged this afternoon.

Do not write her obituary.

Vermont Sen. Bernie Sanders, who Garner endorsed during the 2016 presidential race, tweeted his support to Garner and her family.

My thoughts are with Erica Garner, her family and friends in hoping that she has a full recovery and rejoins the struggle for justice as soon as possible. I have had the privilege of joining with her at a number of events and was deeply impressed with her courage and insights.

Rev. Al Sharpton reportedly visited the family in the hospital.

Garner first suffered a heart attack in August after giving birth to a boy. Her mother said that doctors told them the pregnancy had impacted her enlarged heart.