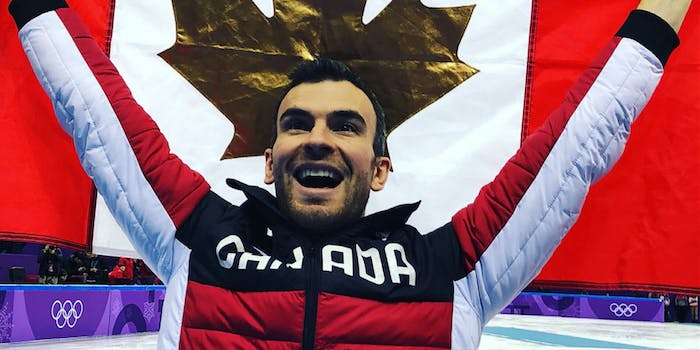 Radford won gold in the team event for his performance with his longtime figure skating partner, Meagan Duhamel. Radford originally came out in December 2014, a little less than a year after the 2014 Olympics in Sochi concluded. But Radford’s win signals a major first in the Winter Games, which had previously hosted LGBTQ athletes, but never a gold medalist.

Meanwhile, U.S. figure skater Adam Rippon became the first openly LGBTQ American athlete to medal at the Winter Olympics, earning bronze during the same event. Rippon and Radford later posed for a picture together, celebrating their impact on the Olympics as out LGBTQ athletes.

“So proud that @Adaripp and I get to wear these medals and show the world what we can do!” Radford tweeted, using the hashtags #represent and #outandproud.

So proud that @Adaripp and I get to wear these medals and show the world what we can do! #represent🏳️‍🌈 #olympics #pyeongchang2018 #pride #outandproud #medalists #TeamNorthAmerica pic.twitter.com/eXMlZ2Utrw

Both Rippon and Radford join a long line of LGBTQ Olympians, dating back to Germany’s Otto Peltzer in 1928, who was later imprisoned by the Nazis during the Holocaust. Fourteen Olympians at the Pyeongchang Olympics are openly LGBTQ, Outsports reports, suggesting more queer gold medalists may be on the way.