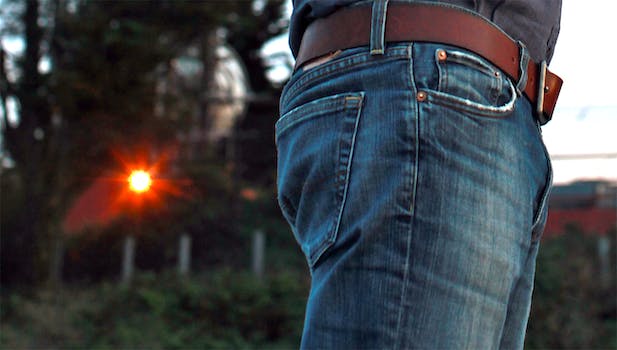 Penis problems are scary, but the Internet can help.

Jake is in urgent need of help. The 20-year-old posted on an online forum for MedHelp.org that his “penis is dead” most of the time and particularly around the girl he’s currently dating, and yet perfectly erect around his ex. He’s desperate to find a solution and, in his own words, is at his wits end. Jake’s on this forum, like so many men before him, to try to find comfort—and answers.

In his online posting, Jake wonders if his problem is mental or medical. He admits to having tried popular erectile dysfunction (ED) medications like Cialis and Viagra to no avail. So he’s turning to the other men who have experienced similar symptoms for answers. Much like amateur detectives trying to solve cold cases from their mother’s basement, he is trying to look for clues he may have missed.

It may sound strange, a 20-year-old fretting about extreme ED: after all, most commercials for treatment show a septuagenarian with blinding white veneers hanging off the side of a sailboat as he gazes seductively at a woman who looks like his wife of 40 years. But the data paints a much different picture about the type of men suffering from ED.

According to a 2013 study from the International Society for Sexual Medicine, one in four new ED patients are men under 40. The study also showed that nearly half of the younger men in the study suffered from severe ED, “with comparable rates in older patients.” A 2012 study estimated that half of men from 40 to 70 have some form of ED.

Analysis of these ever-growing online forums shows a similar and surprising skew toward the young—but to a much more dramatic degree. According to the analysis done by U.K. online pharmacy Superdrug Online Doctor with data from 3,962 unique posters spanning July 2007 to October 2015, more than 58 percent of men posting on this particular forum were 24-years-old or younger. Only 31 percent, in fact, were 30 and above. (While these men may seem disproportionately young, it’s important to bear in mind that more than half of Internet users worldwide are 34-years-old or younger.)

Not all of the men turning to MedHelp, and forums like it, are in dire straights. Some are there to discuss minor problems and others are there to compare the effectiveness of different medications, like the most popular Viagra, Cialis and Levitra. In a post titled “Can’t get hard, does Cialis work?” a 33-year-old man describes his trouble keeping an erection during sex because of a beta blocker he takes called Metoprolol. “Will it [Cialis] counter-act the effects of the metoprolol and allow me to get and keep a hard erection?” he asks the forum.

“The doc said I could also try switching to Diltiazem a calcium channel blocker,” he writes. I may do that too but I suspect that I’m going to need the Cialis anyway. I never even get spontaneous erections in the morning any more either. It’s ruined my self esteem because I’ve been too scared to have a sex life because I know my penis won’t perform in spite of me wanting to.”

He closes by asking “Does this medication really work?” Even after speaking to his doctor, he’s not convinced of the advice he’s been given. He’s seeking what so many other Internet users are seeking: positive affirmation.

Perhaps because of their anonymity online, these men speak openly about very personal sex-related problems. “One of the most surprising things we saw was the transparency of these issues and how candidly they were speaking to online communities,” Erin Hogg, speaking on behalf of Superdrug Online Doctor, told the Daily Dot via phone. “It’s a very private issue and guys don’t want to talk to their friends about this stuff. [Forums] are anonymous, safe places to get things off their chests.”

Some of the language is, well, quite blunt. In another post on MedHelp.org called “Penis is bent,” a man describes, well, exactly what it sounds like. 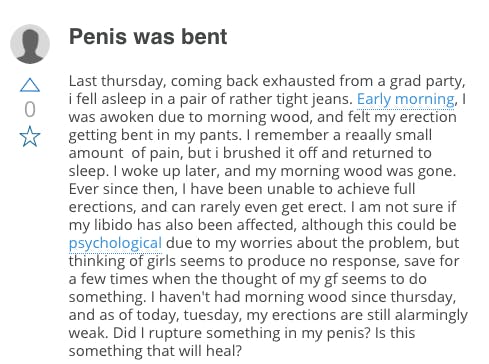 Tristan Harris, the project manager/researcher on the Superdrug study told the Daily Dot in a phone interview that these type of freak injuries that people described were the one of the most surprising elements: “A lot of the posts were mentioning different types of injuries. It’s definitely kind of terrifying to see.”

Scrolling through the hundreds of posts on MedHelp, you’ll see ones like “Severe accident to testicles,” “Penis fractured/broken/snapped,” and “Leaking veins.” It’s enough to make even the most macho man recoil in his leather recliner. 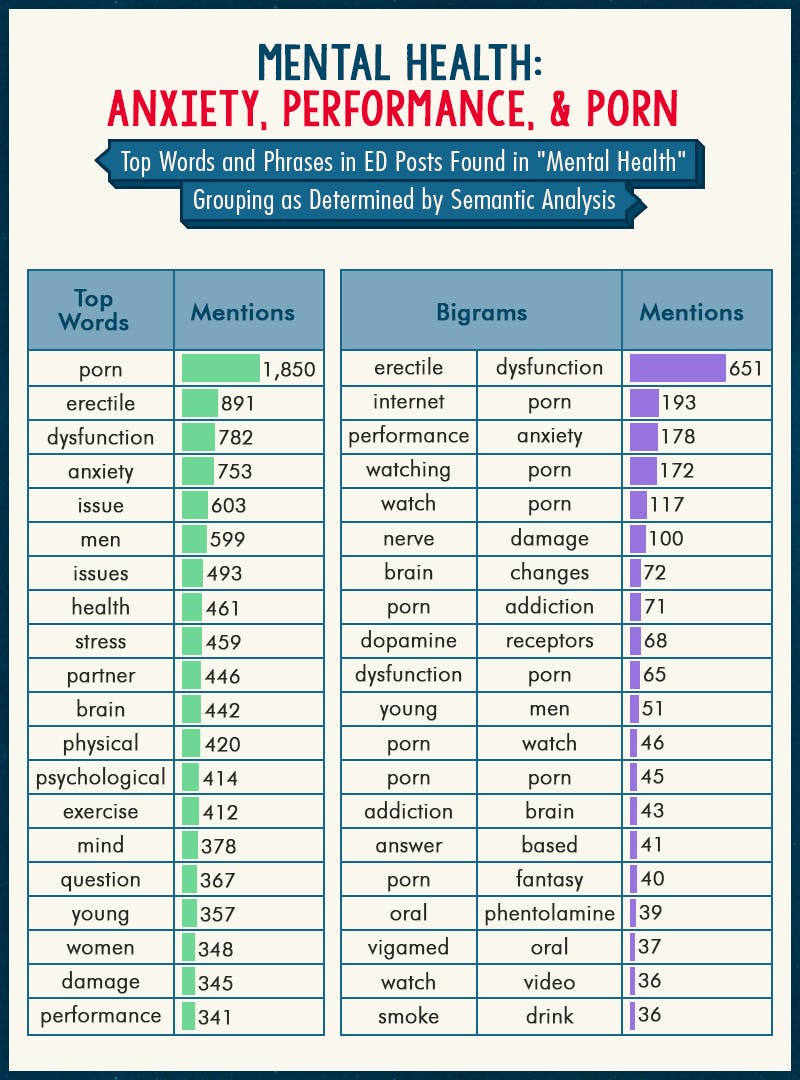 Erectile dysfunction: Talking about it

While it’s encouraging to see men reaching out to other men while experiencing a problem, there is some concern that men may seek this sort of anonymous, private counsel instead of from a professional. “There are plenty of good and bad resources online, naturally. You can get lousy advice about everything from selecting the perfect wine for your meal to changing your motor oil,” Fred Wyand of the American Sexual Health Association told the Daily Dot via email. “So of course the potential for misinformation regarding health issues is ever present and is also the reason why one should not allow forums or any website to replace the advice and guidance of their health care professional.””

Wyand sees forums like MedHelp, and others like Daily Strength and Reddit’s various subreddits on the subject, primarily as places for community but certainly not for expert opinions. “Forums are especially good at providing support, a sense of understanding from others going through something similar,” he continued. “But of course one should always consider the source and go back to the doctor or nurse with questions.”

The Internet can be a resource for people going through more or less any problem under the sun. From dealing with sobriety, to going through weight loss, communities exist to help people stay the course and learn from the experience of others. What is perhaps most interesting about the ED forums is that it paints a very different picture of the type of man who is experiencing the issue: he’s not only just old, white and rich. This man is oftentimes young, scared and alone, and other men are there to lift him up—so to speak.

Photo via torbakhopper/Flickr (CC BY ND 2.0)