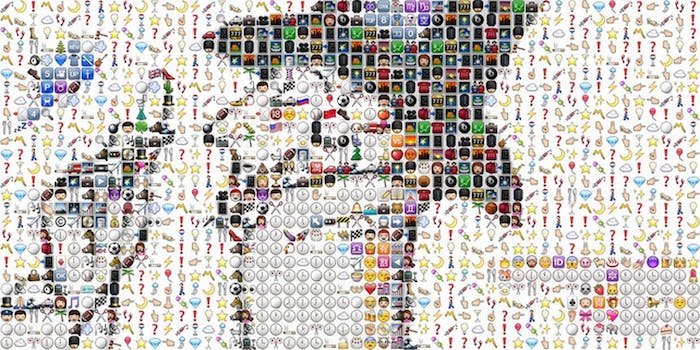 Who will be America’s next top emoji artist?

If emojis are now art, are we all curators?

Emojis have slowly infiltrated pop culture, so it was only a matter of time before the cartoonish symbols got their own art show.

Yes, the Emoji Art & Design Show is real, and coming to New York City’s Eyebeam Art & Technology Center on Dec. 12. Why, you ask? According to the site:

“This visual form of communication isn’t necessarily new—from cave paintings, to hieroglyphics, to religious and mythological symbols encoded in traditional painting and sculpture, we’ve been communicating through images since the dawn of mankind—but its dominance in culture today, especially among millennials, seems to indicate a greater shift in our approach to self-expression.”

Emojis have, for better or worse, become a form of communication, and are now the medium for reinterpreting other art forms, like TV shows, novels, and New Yorker magazine covers. Earlier this year, the J. Paul Getty Museum and the Tate Modern used a Twitter hashtag to collect classic works of art reinterpreted via emoji, but this show might be the first collective effort to display them as art in real life. This has  led many to believe art is dead, but perhaps that’s a nearsighted view. The prevalence of emoji, GIF, and meme art just means more people can be curators now. Also, the phrase “art is dead” can be conveyed using emojis.

Zoë Salditch, communications director at Eyebeam, says they’re “looking for works that interpret or appropriate the emoji character set in exciting and interesting ways. …These tiny images have permeated our culture and it’s only fitting we take a moment to recognize its significance. I wouldn’t say that emojis are the art, per se, but they are a visual language. And when a visual language is employed creatively by artists, something interesting will certainly happen.”

This exhibit welcomes painting, video, digital art, sculpture, and “performance,” so this might be a great time to debut your performance art piece, “The Emoji Whisperer.”

The deadline for submitting work is Nov. 8. There will also be a “pop-up market,” featuring emoji-themed goods, just in time for the holidays.