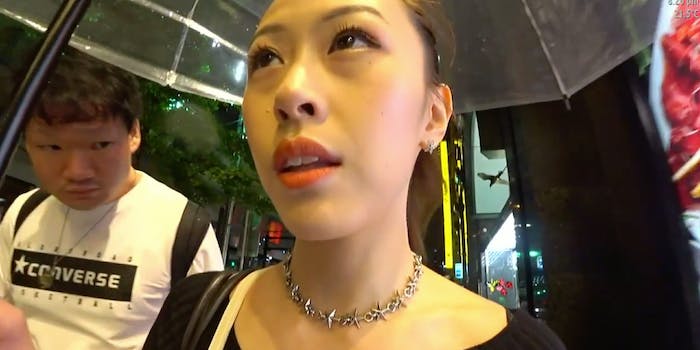 'I feel so disgusted right now.'

IRL Twitch streamer Elliegato had an extremely unpleasant experience while walking the streets of Tokyo, Japan. She was followed and grabbed by a man during a broadcast.

Ellie Li’s Twitch channel states that she is originally from Australia and only started streaming in early June after moving to Tokyo. Despite her short streaming career, Li has already had a brush with a major risk present while IRL Twitch streaming.

On her stream, Li is seen walking through a street while interacting with her chat. A man in a white shirt can be seen following her. As the stream continues, the man walks closer and closer to Li–and she takes notice. Eventually, the man is so close to Li that he is underneath the umbrella that she is holding.

When the man continues to follow Li and eventually tries to grab her by the arm, she starts to yell at him and he quickly runs away from view. “I feel so disgusted right now,” a noticeably upset Li says as she continues down the street.

In her Discord server, Li clarified the situation: She confirmed that she did not think the man was pursuing her with the intention of robbing her. Li said that the man “was looking at me with that smirk (that) said something along the lines of ‘Wait, I wanna talk’ as he grabbed me.”

This is not the first time something like this has during a stream. Andy Milonakis had a lengthy interaction with a stranger on the street who seemed to be attempting to lure him to a secondary location. The man proceeded to chase him when Andy did not wish to comply.

Following the incident, Li’s channel was banned. The reason for the ban is unspecified but viewers on Elliegato’s channel during the time of the ban say that it could’ve possibly been for the “sexual attire” she was wearing at a club later on that night.

“If there’s a chance for me to write anything when I apply for partnership I’ll mention that the ban was for when I was wearing shorts but seemingly were mistaken for underwear,” wrote Elliegato on the possibility of appealing the ban.

As of the time of publication, Elliegato’s Twitch channel is back up.