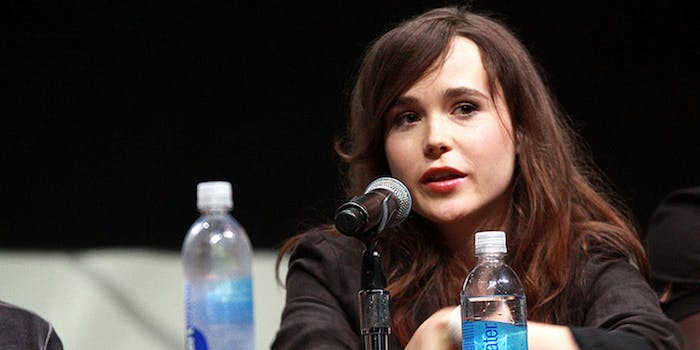 It's important that the actress came out. But the way she came out might be even more important.

Ellen Page, the scrappy young actress known for her wry roles in such iconic films as Juno and Inception, has long had an “open secret” in Hollywood. As the 26-year-old Canadian revealed last night during a moving speech to the Human Rights Campaign, she is gay.

Over the years since Ellen DeGeneres came out in a scripted episode of her hit TV show, very few if any major celebrities have faced the public head-on when coming out for the first time. Most admissions are made privately, in relative safety, and announced later in print—take, for instance, Anderson Cooper who confirmed years of rumors with a casual email in 2012.

As the footage of Page’s announcement reveals, however, the reality of coming out is a scary, emotional process that it’s easy to gloss over when you’re only reading words in print.

“Loving other people starts with loving ourselves and accepting ourselves,” Page said during the speech at the HRC’s Las Vegas convention Friday. Page, who was speaking to an audience full of queer teens, has had some of her biggest roles embodying teenagers much like the ones in the audience: a scared pregnant teen facing the reality of unwed motherhood in Juno; a girl on an identity quest in conservative Texas in Whip It.  Last night, she embodied the uncertainty and fear around yet another important social issue that affects millions of teenagers. Only this time, she wasn’t acting a part.

Page took a breath and appeared to be steeling herself for the big announcement, which comes around the 5:20 mark in a speech in which she applauds the bravery of the GLBTQ community, and says she’s “tired of hiding and lying by omission.”

Page’s timing is extremely important, falling during the Sochi Olympics and international controversy over Russia’s anti-gay laws. Page also follows NFL draftee Michael Sam, who came out in the New York Times shortly after a Buzzfeed article about the locked NFL closet. Sam’s draft prospects immediately fell as NFL teams reacted to the news. As Page explains in her speech, that’s why it’s important to put a face on the struggles queer individuals face.

“And because maybe I can make a difference to help others have an easier and more hopeful time.”

She’s definitely given all of us hope today.