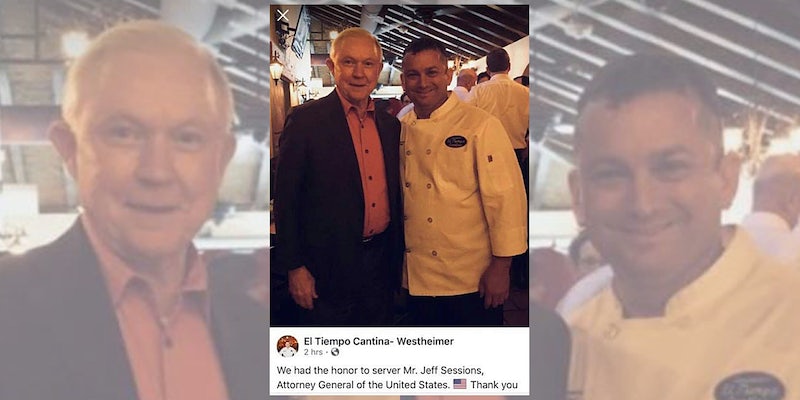 Customers called for a boycott after the owner said serving the attorney general was an 'honor.;

On Friday, the owner of a Tex-Mex restaurant in Houston posted a picture with Attorney General Jeff Sessions—and by Sunday afternoon, the restaurant’s social media had gone dark in response to backlash from the photo.

Roland Laurenzo, owner of El Tiempo Cantina, posted the photo of him posing with Sessions, saying it was an honor to serve him. Customers who are not fans of the attorney general—who was largely responsible for the child-separation policies at the border, among many other xenophobic practices—were quick to make their opinions heard, including some who called for a boycott of the Houston chain. Before the end of the day, #boycotteltiempo had spread among Houston Twitter users, and the president of the Houston Food Blogger Collective said she’d be removing posts about the restaurant from her blog.

#BoycottElTiempo… I will gladly get my brisket nachos elsewhere. And to think I overly supported and blogged about this family's multiple Restaurants. I will be removing those posts from my site. pic.twitter.com/93PrLd7CDx

Jeff Sessions continues to target immigrants and enable Trump’s discriminatory policies yet @ElTiempoCantina is “Honored to serve him”.

According to CultureMap, Laurenzo initially responded to the criticism by removing the photo and making a statement. “El Tiempo does not in anyway support the practice of separating children from parents or any other practices of the government relative to immigration,” Laurenzo reportedly wrote on the restaurant’s Facebook page. Laurenzo said they were not thinking about politics, because “the only thing on our minds was serving great food and giving great customer service.” Laurenzo also claimed the photo was posted “without review or approval by ownership” and said people are “jumping to conclusions that somehow we are involved in this political matter.”

Laurenzo’s statement did little to settle people’s outrage, though. People have taken issue with the last part of the statement for multiple reasons. Most obviously, people are wondering how it is possible that ownership didn’t give approval when it was the owner himself in the picture. Then there was the claim that people were jumping to wrong conclusions about the owner’s politics; people posted receipts to show otherwise, including articles from 2016 about the owner hosting a pro-Trump rally outside the restaurant.

After the statement was soundly rejected across social media, El Tiempo Cantina began deleting its accounts on various platforms. Speaking to ABC13, Laurenzo said, “At least temporarily I had it taken down because I don’t want to be insulted.” As of Monday, El Tiempo’s social media is still shuttered, and Houston foodies are still calling for a boycott.