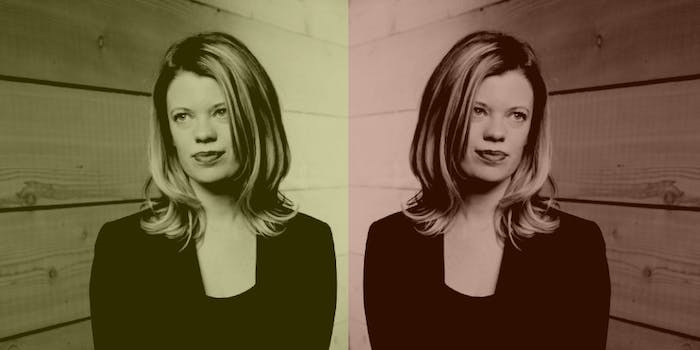 Women in Silicon Valley still change their appearances to gain respect, but they lose something else.

Despite popular opinion, it may be reasonably difficult for blonde women to have “more fun” if they’re being taken less seriously at work. This was the case for Eileen Carey, a Silicon Valley CEO who dyed her blonde hair brown, ditched her contact lenses, and wore more “androgynous” clothing in order to look older, and subsequently be taken more seriously.

Carey is the CEO and a founder of Glassbreakers, a tech startup that creates software for companies to attract and empower diverse job candidates. In her profile for the annual BBC 100 Women, Carey said she first dyed her hair after receiving advice from a woman in venture capital—she was told the investors she was pitching to would be more comfortable giving funds to a brunette woman than blonde.

This change in part made sense because of pattern recognition, a theory that says people look to familiarity because it’s what they’re comfortable with over taking a risk. In this case, Carey was told her blonde hair likened her to Theranos’ notorious CEO Elizabeth Holmes.

“I was told for this raise [of funds], that it would be to my benefit to dye my hair brown because there was a stronger pattern recognition of brunette women CEOs,” Carey told BBC. “Being a brunette helps me to look a bit older and I needed that, I felt, in order to be taken seriously.”

She also traded her contact lenses for glasses, and incorporated more loose-fitting “androgynous” clothing into her wardrobe, all to distance herself from her previous appearance that made her more likely to be flirted with at work. And she’s not the only one—in interviewing candidates for Glassbreakers, Carey has met other women who have dyed their hair brown in order to stop being fetishized and to be taken seriously, too.

“For me to be successful in this [tech industry] space, I’d like to draw as little attention as possible, especially in any sort of sexual way,” Carey said. “I want to be seen as a business leader and not as a sexual object. Those lines are still crossed very often in this space.”

Carey is absolutely free to dress how she wants, but the fact that she has needed to change her appearance to succeed in the first place is indicative of how far Silicon Valley still has to go in terms of challenging workplace sexism and expanding inclusivity.

While the U.S. still values and perpetuates Western beauty standards of light (read: blonde) hair, white skin, and blue eyes through media representation, it would appear that conventionally attractive women cannot be taken seriously in the workplace without “toning down” their appearance. It wasn’t enough that Carey could dye her hair darker—women must make themselves appear less “risky,” less “shapely,” less “feminine,” and more “androgynous” (read: masculine) in order to succeed in the male-dominated industry.

In case it wasn’t obvious, this is Sexist Thinking 101: It puts the onus on women to change, to take sexuality out their person to make men more comfortable. The insinuation here is that men cannot control their sexual impulses, and when women comply with the Western beauty standards that have been shoved down their throats and don’t obscure their faces with framed glass, then they are asking to be looked at as sex objects. If they want to compete in the workforce, they must look more like men because, of course, men are never attracted to each other.

There is no such thing as nuance or even duality—conventionally attractive women may be “rewarded” for their looks with sexual attention, as Carey says, but they do not get to be valued as smart or even competent. The “beauty and brains” label we quipped as children does not exist.

Meanwhile, in another part of California, we still have male industry leaders who see having sex with their employed inferiors as “unavoidable,” and the double standard marches on. Le sigh.