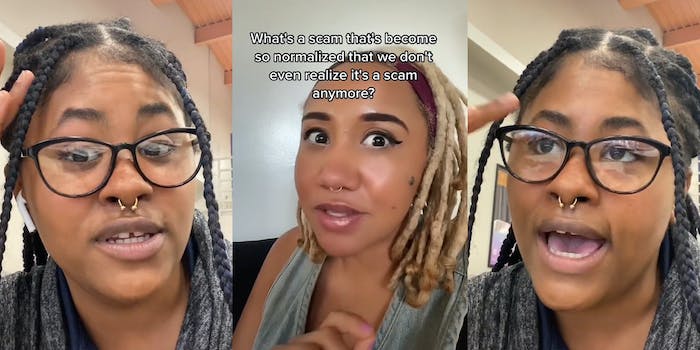 ‘Your naps are not laziness. Listen to your body’: TikToker shares how the 8-hour sleep cycle is a capitalistic scam

'Capitalism has made it so that we see naps and rest as inconvenient.'

A TikToker went viral this week for saying the eight-hour sleep cycle is a capitalistic scam, sparking debate about the structure of work and sleep deprivation in the United States.

The viral video, which has over 3.2 million views, was posted by TikToker Robyn (@itsrobyn__), who has over 22,500 followers for her videos on a variety of lifestyle, cultural, and social topics. This includes a series launched this week called “Sleep Sista” in which she discusses sleep cycles, tips, and sleep history.

The viral video shows Robyn stitching a video from another TikToker, which asks, “What’s a scam that’s become so normalized that we don’t even realize it’s a scam anymore?”

@itsrobyn__ #stitch with @debtcollective on average Americans lose almost 2-3 years of sleep compared to other countries due to our work schedule. #themoreyouknow #sleep #sleeping #sleepexpert #itsrobyn__ #fyp ♬ Love You So – The King Khan & BBQ Show

“I might shake the room with this one, but um, sleeping. The 8-hour sleep cycle that we have? Yeah, it’s a scam,” Robyn says in the video. “It’s been ingrained into our society so that we run on a capitalistic sleeping schedule, but we didn’t use to abide by the eight-hour sleeping schedule. We used to actually have two sleeps.”

The TikToker says historically, humans used to have two periods of sleep called a first sleep and a second sleep. People would wake up early at sunrise, do most of their work for the day, then take another sleep around lunchtime before hanging out for the rest of the evening.

In multiple videos, the TikToker ties the eight-hour sleep cycle schedule to the Industrial Revolution and the introduction of the assembly line in the American workforce. She points out that many other countries, like Spain and Greece, have mid-day breaks for naps, and the sleep cycle we have today in the United States leaves us sleep-deprived.

@itsrobyn__ Reply to @azuraquinlilax if can nap! If you want a small one no more than 20 minutes thatll do the trick! #naps #naptime #itsrobyn__ ♬ original sound – 🌷Robyn💕

“On average Americans lose almost 2-3 years of sleep compared to other countries due to our work schedule,” the TikToker captioned her video.

The video series has sparked controversy in its comments section over the eight-hour sleep cycle’s ties to capitalism. Many users said they assumed they were lazy for wanting naps mid-day, and expressed feeling scammed.

“Soooo….all this time…my second sleep that I thought was me being lazy….was actually ideal??” one user commented.

“No, your sleepiness isn’t laziness. It is literally your body telling you that you would like to go back to sleep,” the creator said in response. “Unfortunately capitalism has made it so that we see naps and rest as something that is inconvenient.”

Other users in the comments section agreed capitalism was to blame.

“Capitalism has messed up everything in my opinion,” one user argued.

Although some users criticized the TikToker for not providing sources, she was quick to make a follow-up video linking several articles about the history of sleep.

One article from the BBC describes how in the European Middle Ages and in ancient Greece, the practice of having two sleeps, also called “biphasic sleep,” was common. The author wrote that in Europe, the practice likely fell out of favor during the 19th Century Industrial Revolution, when artificial light from electricity became popular and altered circadian rhythms—aka, the internal cycle our bodies go through on a day-to-day basis depending on our sleeping times—to optimize work.

The author also speculates that perhaps because many humans now have deeper, more peaceful slumbers due to more comfortable, safe sleeping conditions, a single sleeping period may be sufficient.

Another article from CNN Health points out that scholars do not believe sleeping in two shifts was a universal habit across cultures in ancient times, and most agree that choosing a sleep pattern is deeply personal and dependent on cultural factors. Today, multiple cultures tend towards biphasic sleep periods—take, for example, the common Spanish “siesta” afternoon break.

Over one-third of American adults are not getting enough sleep, according to a new study by the CDC. Long-term sleep deprivation can lead to a number of health issues, including high blood pressure, seizures, headaches, joint and gastrointestinal issues, mood shifts, and hallucinations.

The Daily Dot reached out to Robyn for comment via email.