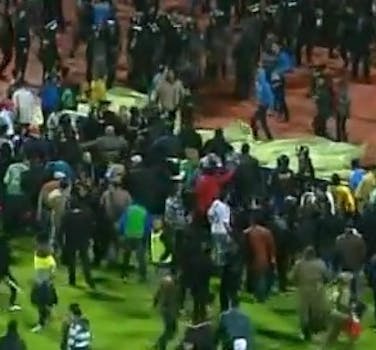 Egyptians gathered at YouTube to mourn and discuss the soccer game riots.

On Wednesday, at least 79 Egyptians were killed during a riot that began over a soccer game in the Port Said stadium. Egyptians, much like their Western counterparts, took to YouTube to express their grief.

The global video sharing site has become a commons for people to release emotions following political, or personal turmoil, given its neutral stance—and it was no exception for the Egyptian people.

Most-viewed riot-related videos ranged from tribute videos of the players and people who died overlayed with music, to news clips, amateur footage, and even vlogs (in this case personal stories) about the riot were the most viewed videos in Egypt on Thursday, according to YouTube statistics. Some videos saw close to one million views, each with thousands of comments, having been up for about 24 hours.

Riot footage, taken from a news broadcast, was the most viewed video in YouTube’s global news section on Thursday, with multiple news clips re-uploaded numerous times.  Some copies showed bystanders beating each other with stadium chairs. Others showed Egyptian police failing to sway the crowd.

Arabic-speaking people from other nations for the most part, took to leaving respectful messages to the Egyptian people on related videos. (Though the political debates managed to flair up, the mood was mostly somber.)

“With deep sorry and grief extend our heartfelt condolences and sincere sympathy to the supporters of Al-Ahly and all the Egyptians. Your brother from Algeria” wrote Ateman100
in a top comment on one copy of news footage, translated from Arabic by Google translate.