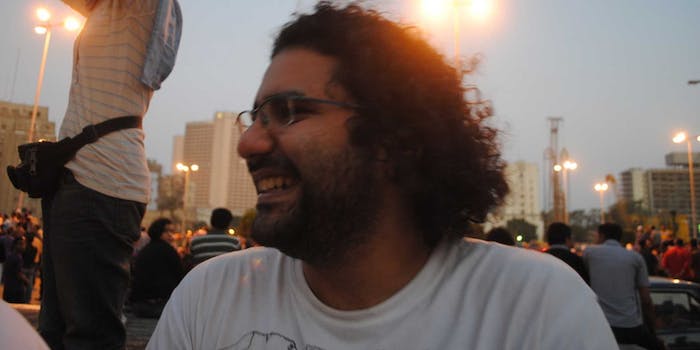 His supporters shouted 'Down with military rule!' at the trial.

Egyptian blogger and activist Alaa Abd El-Fattah has been sentenced to five years in prison for protesting the lack of due process in the country’s court system.

Fattah, born into a family of Egyptian academics and political activists, is a computer programmer known for founding the award-winning blog aggregator Manalaa, which became one of the most important information sources for the country’s pro-democracy movement.

He became a major presence in the 2011 Arab Spring protests that ultimately toppled the regime of the country’s long-time ruler Hosni Mubarak. Two years later, he helped organize a protest in front of the Shura Council, Egypt’s since-dissolved legislative body, calling for the country’s new constitution to eliminate civilian trials in military courts.

Authorities dispersed protest with tear gas and water cannons and claimed that officers were assaulted during the demonstrations.

Fattah and two dozen other protesters were arrested for breaking a recently introduced law prohibiting street protests that weren’t approved by the Ministry of the Interior. They were initially sentenced to 15 years in prison.

Those convictions were later overturned and the defendants were given a retrial. Fattah was then sentenced to five years in prison with another five years of probation. Other defendants received fines and sentences that stretched between three and five years.

The Daily Mail reports that supporters of Fattah chanted “Down with military rule” after the verdict was read, while the BBC reports that Fattah’s defense lawyers are planning to appeal the ruling.

Fattah is reportedly on a hunger strike, consuming only liquids like juice.