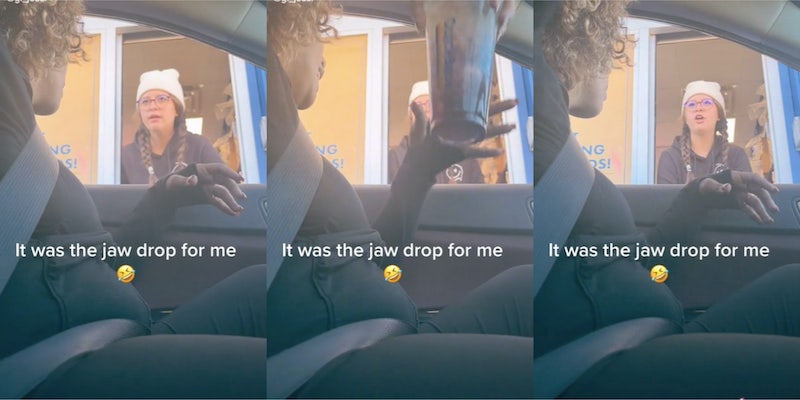 ‘I will let her know that he is married’: Woman calls out Dutch Bros barista for writing phone number on her husband’s cup

'I was only wanting to let her know not to expect a text from him.'

In a viral video, TikToker Jessi (@gi_jessi) confronted a barista at Dutch Bros regarding one of her co-workers writing her phone number on her husband’s cup. The video has garnered over 5.7 million views.

“I was only wanting to let her know not to expect a text from him,” the caption reads.

After grabbing her coffee from the barista at the window, Jessi asks if a girl named “Hailey” was working. The barista proceeded to look behind her and told Jessi that she must have left already.

“Tell her thank you for the number on my husband’s cup,” Jessi responds.

“Okay, I will let her know that he is married okay?” the barista responded after her jaw dropped.

In the comments section, which is now turned off, users were divided on the creator’s decision to confront the woman.

“I don’t think Hayley did anything wrong. She obviously didn’t know he was married. Kudos to you. I would have [done] what you did too,” one user commented.

“She is absolutely 100% [Hailey],” another claimed, referring to the barista Jessi was speaking to.

“Girl he’s your man.. if he doesn’t save the number then why confront HER about it please,” a third user said.

In an updated comment, Jessi noted that the barista at the window was not Hailey.

“You guys are just passionate,” Jessi adds in a follow-up video detailing the story behind the video. She also urged viewers to leave their comments on that TikTok.

Here it is, enjoy.

The Daily Dot reached out to Jessi via TikTok comment.