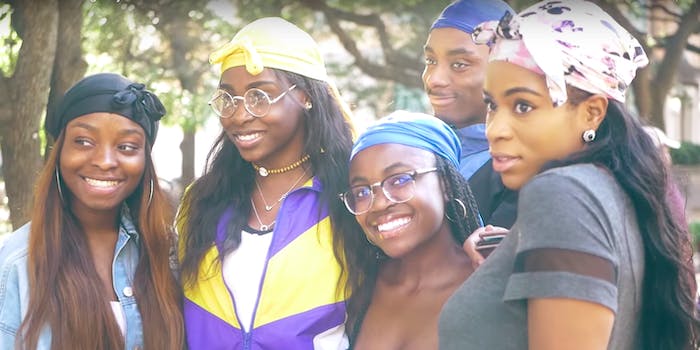 Once a covering worn by slaves, the durag has evolved into a beautiful statement.

In conservative states like Texas and North Carolina, Durag Day is sweeping American colleges as a symbol of Black empowerment and unification.

The durag, a piece of cloth worn on the head, has its roots in the scarfs female slaves used to keep their hair back and heads cool while the worked in the hot sun. In the 1930s, it evolved into what it still sometimes used for today—protecting hairstyles while sleeping. In other words, the durag was typically worn at home and not out in the public, as if not to draw attention to the differences of being Black in a white world.

But in the 90s and early 2000s, the durag became a fashion statement of Black pride, worn by rappers like 50 Cent and basketball players like Allen Iverson. And while the trendiness of the durag has worn off, it is now re-emerging as an act of self-love.

In that vein of reclamation, during the month of October, various colleges are celebrating Durag Day, including the University of Texas at Austin, Texas A&M, Florida A&M, and North Carolina A&T State University.

Durag Day kicked off on Sept. 26 at Morehouse College, a historically Black university in Atlanta. Soon after the Morehouse event went viral, the celebration of Black culture spread across the nation.

Nasir Brown, a sophomore psychology student at Morehouse, was one of the founders of Durag Day.

“The idea generated from the want to express self-care and self-love to Black men throughout the college,” Brown told the Daily Dot. “The durag is more than an accessory.”

Brown said he often wears his durag in public and because of that, he’s sometimes stereotyped. “The purpose of Durag Day was to change that connotation,” Brown said. “It feels great to know that I had such an impact on many young Black people across the country and I want to continue to have that impact.”

David Bishop, another founder of Moorehouse’s Durag Day, said some men from his college got together with students from Clark University in Atlanta to highlight Black aestheticism.

“Oftentimes, durags are frowned upon, but why should it be?” Bishop said. “It’s a part of our culture.”

At the University of Texas at Austin, student radio-television-film student Ukairo Ukairo created a video about Durag Day, captioning it, “Here’s to loving our blackness.”

Brandon Pegram, a UT sophomore, told the Daily Dot he participated in Durag Day “to showcase Black freedom and culture, and to reverse the stereotypes of [being classless] and ghetto associated with durags, bonnets, and scarves.”

Pegram said he began wearing a durag in public in August, as a way to keep his hair nice, and it eventually became a fashion statement. He said his mother had hated whenever he wore it in public because she felt like it was something for the privacy of your own home and feared society would tag him with negative stereotypes.

But at a school like UT, where only about 4 percent of students are Black, Pegram’s statement of Black self-love can seem even more vital.

“To be black at a PWI (predominantly white institution) is to be constantly watched and judged by those who aren’t Black,” Pegram said. “Being Black at a PWI can be very limiting as it seems you are forced to be who you aren’t, to please people around you.”

However, Pegram said that with the Durag Day event and more Black visibility on campus, he feels as if things are changing for Black students at UT.

“As a Black student at UT, you really have to prove yourself because most people see our skin color and relate us to playing some form of sport for UT, but ultimately some of us are just normal students trying to achieve our dreams and reach our goals,” McDaniel told the Daily Dot.

And if you missed creating a Durag Day at your school this month, not to worry. In 2014, Vann R. Newkirk II founded #DuragHistoryWeek, which happens the first week of November every year.