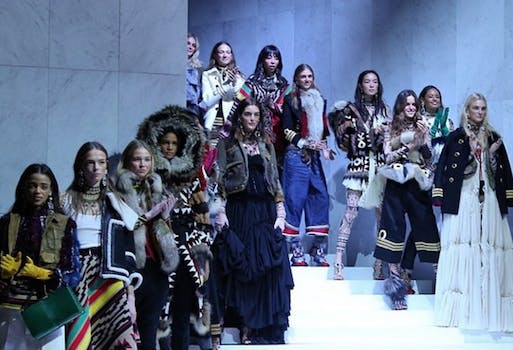 Can the high-end fashion industry make it through one season without a racism scandal? Apparently not.

It wouldn’t be Fashion Week without a hideous racist faux pas of some sort, right?

Last week in Milan, Canadian fashion label Dsquared2 debuted its new collection under the hashtag #dsquaw. If you’re at all familiar with the ongoing fashion industry trend of appropriating Native American styles, you can probably guess where this is going.

Dsquared2’s collection for Fall/Winter 2015 was heavily influenced by indigenous Canadian clothing. The label’s website says the line was inspired by a combination of “the enchantment of Canadian Indian tribes” and “the confident attitude of the British aristocracy.” Other descriptions of the show are peppered with subtly racist phrases like “indigenous flair” and “mysterious tribal influences.”

The show itself was more or less what you’d expect from designers who profess to be “enchant[ed” by Canadian Indian tribes: lots of furs and animal skins, most of which were modeled by white people.

The #dsquaw hashtag was quickly overtaken by people accusing Dsquared2 of appropriating and exoticizing Native American culture. There were also a lot of complaints about the label’s decision to use the word “squaw,” which is widely regarded to be a racial slur.

#squaw is vile offensive racial slur directed at Native women. Make it #dsquaw and voilá it's a fashion line full of honour? No still vile!

The lastest @Dsquared2 'fashion designs' are degrading to Indigenous women & girls and those racist notions contribute to #MMIW. #Dsquaw

Hey @Dsquared2, do you (and everyone using this hashtag) have any idea how offensive you're being with #dsquaw? Plus, #CulturalAppropriation

If you’re thinking, “Hey, that sounds pretty darn offensive,” then you’d be right. Unfortunately, this kind of thing is hardly a rare occurrence. So-called “tribal” styles come back on trend every few seasons, and there are plenty of examples of designers and stylists using some variation of Native American headdress in their shows. For a while, the Native American headdress trend was dubbed a “hipster headdress,” as hundreds of white people started wearing them to music festivals and parties.

In July 2014, Pharrell Williams caught flak for donning a Native American headdress on the cover of Elle UK. The fashion brands ASOS and Urban Outfitters have also been accused of appropriating Native American culture after releasing collections of “Aztec” and “Navajo”-inspired prints.

Native Americans are not the only marginalized group to see their culture appropriated by the fashion industry. High fashion has also demonstrated its love of blackface, which ranges from “accidental” examples of the inappropriate use of blackface (i.e. using black makeup for some kind of themed photo shoot), to white models literally being painted brown and putting on afro wigs.

Fashion designers and creative directors have been caught using blackface, or some variation thereof, several times per year in fashion shows or on the pages of magazines like Vogue, and the industry doesn’t seem to have learned its lesson at all. Meanwhile, women of color are still sorely underrepresented on the catwalks at Fashion Week.

Since the show in Milan last week, Dsquared2 has removed all mentions of the hashtag #dsquaw from its social media accounts. The clothing line, however, still speaks for itself.