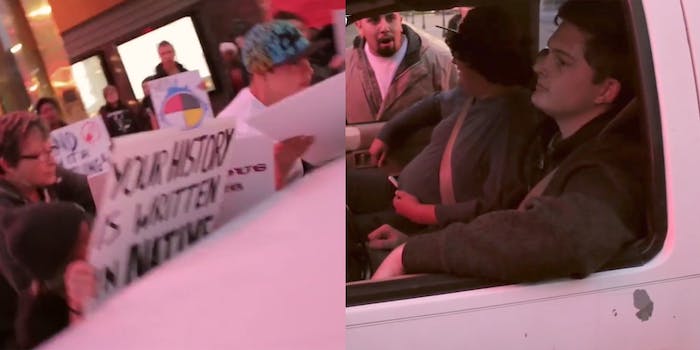 Screengrab via Camera with the band / YouTube Remix by Jason Reed

The American Indian group is calling it an act of hate.

Yesterday, a group of activists took to the streets in Reno to protest Columbus Day and the Dakota Access pipeline. Multiple videos show that as they gathered under the iconic Reno Arch, they were mowed down by a man in a pickup truck.

In the video above, the driver initially stops and begins honking at the protesters, a few of which approach the truck’s windows. The protesters and driver argue and curse at one another, and one protester yells, “Stand your ground!” The driver then rams forward into the crowd. According to USA Today, five people were hit, and one was sent to the hospital.

The Daily Dot has reached out to Reno PD about the incident but hasn’t heard back of this publishing. However, police told KTVN there were approximately 40 protesters, organized by the American Indian Movement of Northern Nevada.

President of the organization, Raquel Arthur, posted to a Facebook group: “Our intent was to bring light and Truth to the unjustices [sic] against us Indigenous People throughout history from 1492 to this present day. The fight is never-ending in this ‘civilized’ world. Truth be told -there is a lot of hate to people of color. As we witnessed the acts of hate last night however We Can Not fight hate with more hate.”