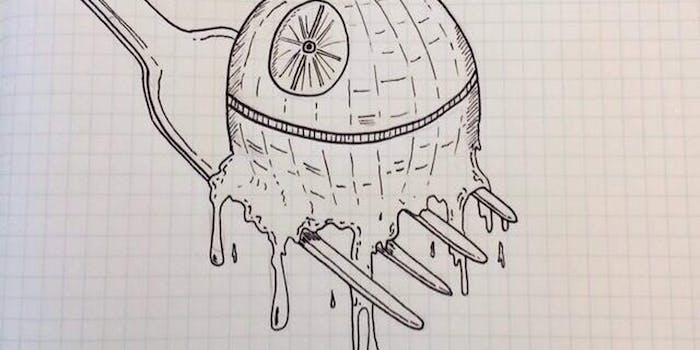 @Drawnyourtweet is turning Twitter into a picture book, 140 characters at a time

Consider this a break from all that text.

There’s a lot of beauty contained within the Internet, but there’s no arguing that text-based pixels take up a lot of that space. Apps like Instagram and sites like Flickr certainly break up the wordiness of the Web, and even the most copy-heavy sites (Reddit, Twitter) have made strides to embrace the image (evidenced by Imgur, and Twitter’s enlarged photo creds).

Despite Twitter’s efforts, we’re still throwing a lot of words into its ether. Except for @Drawnyourtweet, that is.

The concept is a simple one: @Drawnyourtweet chooses a tweet, and then sets pencil to paper to sketch it.

Since early February, @Drawnyourtweets has illustrated 20 tweets, but with that small handful has amassed nearly 4,000 followers (the account follows no one, so the artist behind it is picking tweets at random). The sketches make it clear at once how nonsensical and beautiful Twitter can be.

Whoever is drawing your tweets remains a mystery, but what we do know is that @Drawnyourtweets is about to become your new favorite account. If you fall in love, you might also went to check out Missed Connections: Love, Lost & Found, a book based on the blog of artist Sophie Blackwell, where she collected and illustrated Craigslist Missed Connection stories.