Dr. Phil wants to know if its OK to have sex with a drunk girl

Crowdsourcing is a great idea in all cases except for the ones in which you’re crowdsourcing whether or not it’s OK to sleep with a girl if she’s really drunk.

That’s what TV talking head Dr. Phil McGraw learned Tuesday afternoon, when he—or his social media handler—tweeted the following question to his 1.17 million followers: “If a girl is drunk, is it okay to have sex with her? Reply yes or no to @drphil.” 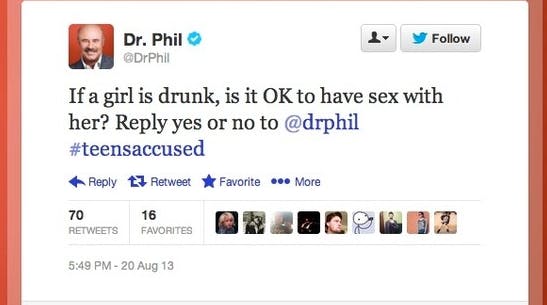 Not surprisingly, the tweet set of a hailstorm of vitriol towards the Daytime Emmy Award-nominated talk show host. You can read a sampling of the responses here, but they were bad, they were angry, and they prompted McGraw—or his social media handler—to delete the tweet within minutes.

That deletion prompted more aggravated responses, much like this one from comedian Gabe Delahaye, who had probably been waiting around for Dr. Phil to make a mistake like this for quite some time.

Now I’m worried that you have all scared @DrPhil and he will never tell us the answer!!!

Probed by BuzzFeed’s Kate Arthur, one of McGraw’s spokesmen wrote: “This tweet was intended to evoke discussion leading into a very serious show topic. It was not intended to be taken lightly.”

Could that explanation be true? Scanning through Dr. Phil’s feed, it’s clear that the 62-year-old psychologist regularly uses Twitter to generate talking points for his afternoon show—with many of those points pertaining to the gray areas surrounding sexual relations. Few are worded as poorly as the tweet drawing such ire, and perhaps Twitter isn’t the best place to crowdsource opinions on topics like this, but surely McGraw could use more than 140 characters to explain the origins of the inquiry.

To that point, McGraw has yet to address the tweet publicly. Instead, his most recent post dealt with the subject of an abduction.