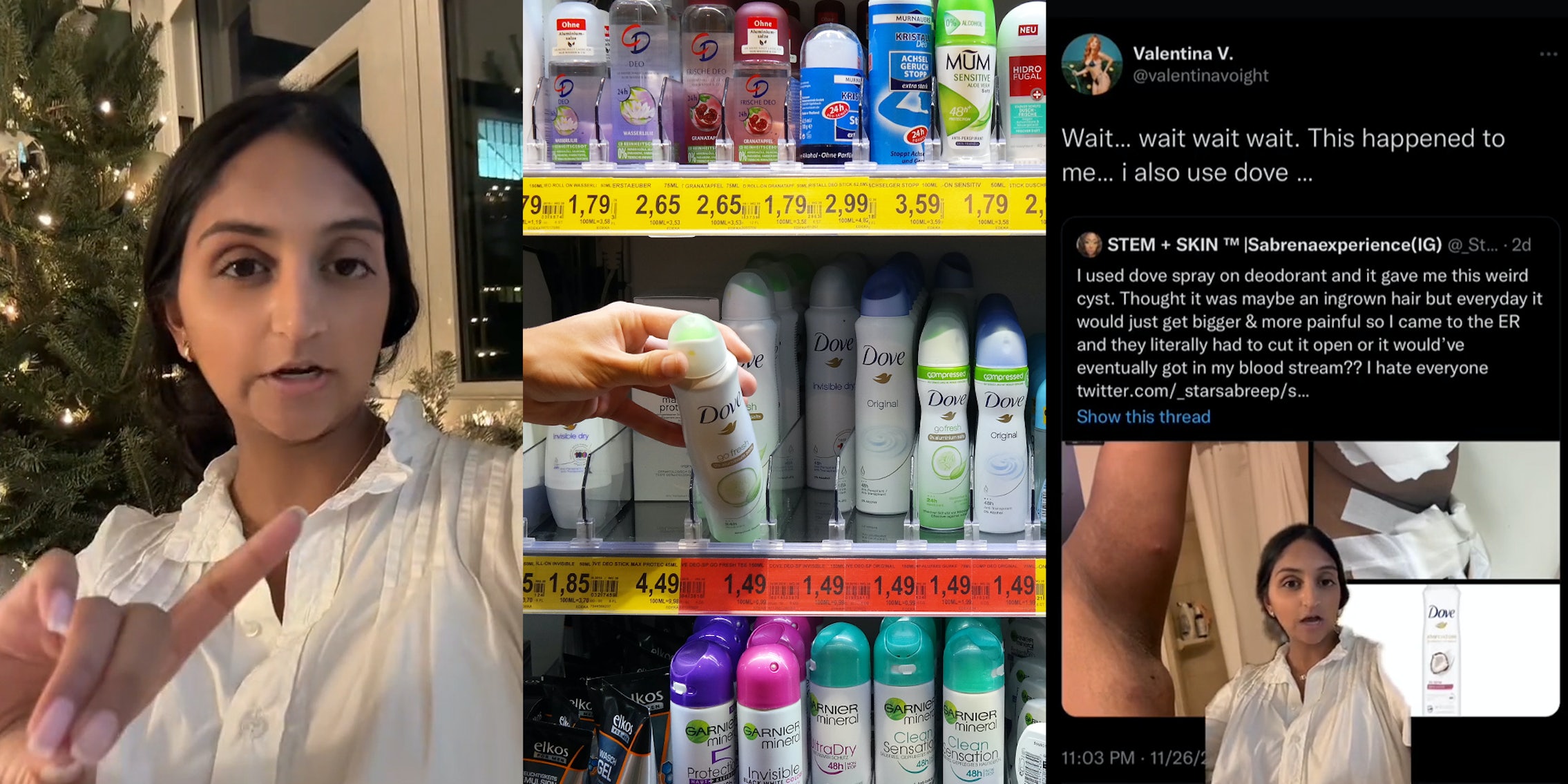 ‘Please triple check the ingredients in products you use’: Dove deodorant spray accused of causing cysts by multiple women

Dove Spray Antiperspirant is allegedly causing cysts in multiple women’s underarms including her own, according to a woman on TikTok.

Trisha Patel (@trish_patel) shared a TikTok saying she had seen a somewhat viral Twitter thread of women talking about getting cysts in their armpits after using Dove’s spray-on deodorant. She says the exact same thing happened to her.

In the video, Patel says she started noticing an unusual lump under her arm in 2016 or 2017. She went to the doctor right away because the lump “literally looked like a tumor” and she was worried. At the time, she says doctors told her the lump was benign and only fatty tissue and that removing it would be considered a cosmetic – not medical – procedure. So Patel says she left it.

Years later, the lump began growing in size and looking “odd,” Patel says. In 2021, the TikToker decided to visit a dermatologist and have the lump removed. She says the procedure to remove it was “pretty intense” and caused her to faint.

After removing the lump and testing it, the dermatologist informed Patel that it was made up of breast tissue, she says. The TikToker adds that the dermatologist called the situation “weird” and said she probably should have gone to a breast surgeon.

More recently, when Patel saw the Twitter thread, she realized her breast tissue lump was “probably” caused by the Dove deodorant she was using.

“Now so many people are coming forward saying that they’ve had similar growths in their underarms from using this deodorant — please stop using it,” Patel says in the video. “Also, I still have a scar from that procedure, which I will probably have for the rest of my life, in my underarm. Not that that’s a big deal, but still.”

Patel’s video seemed to prompt alarm among some viewers, who said they currently use the Dove Spray Antiperspirant.

“Literally have a cyst in my underarm right now and I use dove deodorant,” one viewer commented.

“Wait a dang minute, I’ve always used Dove, noticed I have a small lump in both underarms but thought because I was fat,” another viewer said.

Some said Dove deodorant spray users should seek legal action against the company.

“UMMMM LETS START A CLASS ACTION LIKE NOW,” one user wrote in all caps.

Another user tagged the company, saying, “@dove please respond to this! its unacceptable how many people are complaining of the same thing!!”

However, some viewers were skeptical that the deodorant spray was causing underarm lumps.

“Also had breat tissue mass in my armpit. I DONT use dove deodorant, never have. it’s apparently pretty common,” one viewer wrote.

“When I started using deodorant in the late 80’s my mom warned me against spray deodorant for this reason. I don’t think it’s just Dove, but all sprays,” another said.

The Daily Dot reached out to the creator via TikTok comment and to Dove via email.