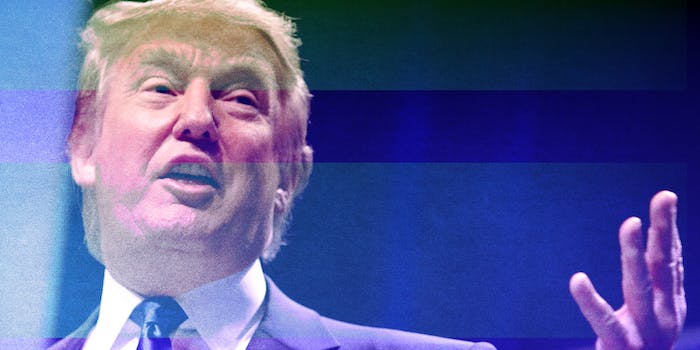 Are you on your period? About to be? Now there’s a website you can use to send updates about your cycle to GOP presidential candidate and perpetual gaffe-maker Donald Trump.

Trump incited outrage this week after he claimed Fox News host Megyn Kelly had “blood coming out of her eyes. Blood coming out of her wherever,” as she questioned him during Thursday’s GOP debate. The comment was widely interpreted to be a jibe about Kelly menstruating, and cost him his invitation to an important conservative gathering.

Although Trump has claimed his comment was misinterpreted—he says he meant to say “nose” and that “only a deviant would think anything else”—people are still tweeting him period updates using the hashtag #PeriodsAreNotAnInsult.

The hashtag and accompanying website, which makes it easy to send Trump a period update with just one click, were created by Femsplain founder Amber Gordon. It offers tweet options for those on their period, those about to start their period, and those who don’t get a period but want to support the campaign anyway.

Even before the site launched, women were already taking to Twitter to let Trump, an active Twitter user, know about their periods.

@realDonaldTrump i’m on my period

Since the site launched late Saturday, the hashtag #PeriodsAreNotAnInsult has been used more than 200 times, according to social media analytics site Topsy.