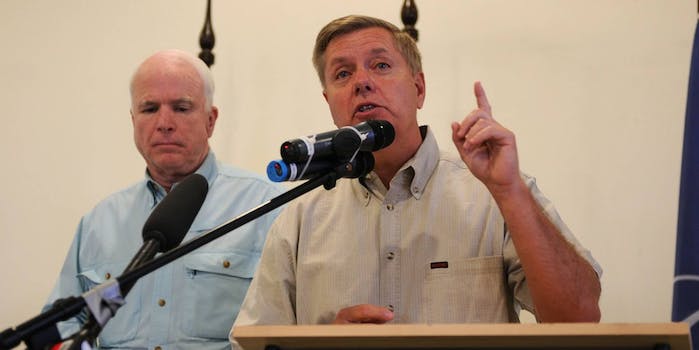 A day after Donald Trump’s immigration ban caused confusion and consternation across the country, Republican Senators Lindsey Graham and John McCain on Sunday released a joint statement in which they said, “Ultimately, we fear this executive order will become a self-inflicted wound in the fight against terrorism. … This executive order sends a signal, intended or not, that America does not want Muslims coming into our country. That is why we fear this executive order may do more to help terrorist recruitment than improve our security.”

The joint statement of former presidential candidates John McCain & Lindsey Graham is wrong – they are sadly weak on immigration. The two…

…Senators should focus their energies on ISIS, illegal immigration and border security instead of always looking to start World War III.

While Democratic congressmen have been blasting Trump this weekend, only a handful of Republicans have denounced his executive order that bars Syrian refugees and nationals from six other Muslim-majority countries from entering the U.S.

As of 4pm CT on Sunday, this was the list.

And now Trump is attacking two of them.