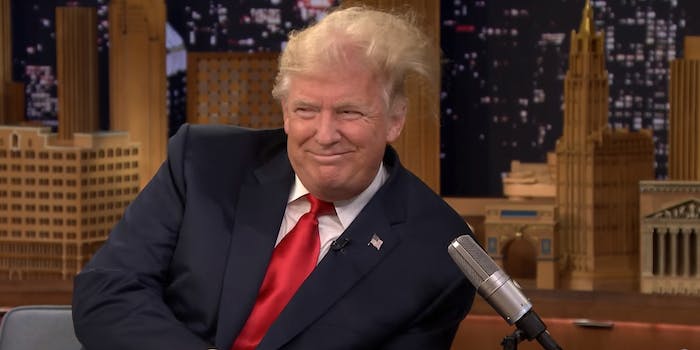 The side effects are frightening.

Whenever Donald Trump’s doctor speaks to the press, it feels like we learn something important. Last August, for example, Dr. Harold Bornstein informed us in a hastily prepared note that Trump would be “the healthiest individual ever elected president.”

On Thursday, Bornstein revealed to the New York Times that Trump is taking Propecia, a prostate-related drug that helps promote hair growth. In a series of four interviews with the Times during the past month, Bornstein also said Trump is also taking medicine to help with his rosacea, a skin problem, and his elevated cholesterol.

But seriously, let’s talk about Propecia.

It’s a drug, aka Finasteride, that, aside from helping regrow hair, lowers prostate specific antigen (PSA) and reduces the chances of getting prostate cancer. So, that’s good news for Trump.

But as Men’s Journal notes, there are a few bad side effects, including the inability to have an orgasm, painful erections, depression, and suicidal thoughts. Even after the patients stop taking the pill, those side effects apparently can last.

Bornstein said he hasn’t spoken to Trump since he became president, and the Trump administration declined to comment on Bornstein’s claims.

But if you’d like to hear more from (or be entertained by) Bornstein from the Times, check out this paragraph:

At times in the interviews, Dr. Bornstein was moody, ranging from saying that Mr. Trump’s health “is none of your business” to later volunteering facts. He also meandered, referring to his longtime study of Italian and stories about medical schools floating cadavers to an island off the waters of New York. He said he liked the attention he got from friends now that he was publicly known as Mr. Trump’s doctor but disliked “the fun made of me” by the news media and strangers who have thrown objects at his office window and who have yelled at him on Park Avenue.

So, it seems like Trump’s oft-discussed hair is actually real—Jimmy Fallon could probably attest to that as well—though he’s obviously receiving chemical help to keep it long and lush. According to Us magazine, he’s also changed his hair color. When he announced Neil Gorsuch as his Supreme Court justice nominee, Us wrote his hair “appeared to look more dirty-blond than his usual bold yellow tone.”

Bornstein apparently did not talk about whether Trump was experiencing any sexual dysfunction. But for the health of the country, the depression and suicidal thoughts possibilities are infinitely more worrisome.