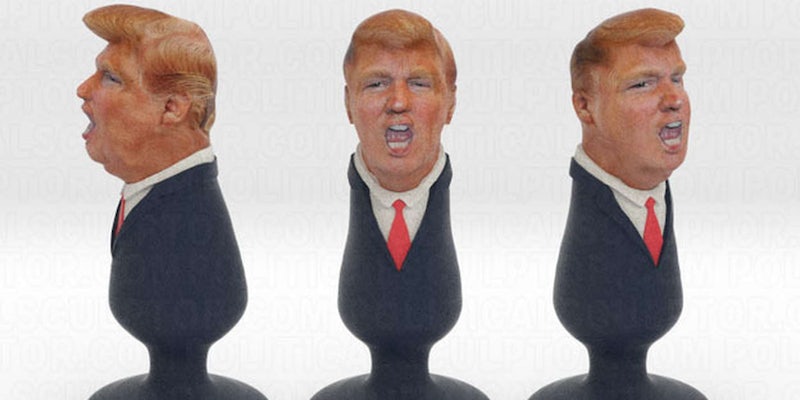 You can now purchase a Donald Trump-shaped butt plug

The 3D-printed masterpiece is beautiful, but not functional.

Walking toupee Donald Trump has already been taken down a peg for his offensive comments about Mexicans via an articulately written open Facebook letter posted by a young woman whose father is a Mexican immigrant. But Fernando Sosa decided to take a slightly less elegant approach—by creating a butt plug of his likeness. 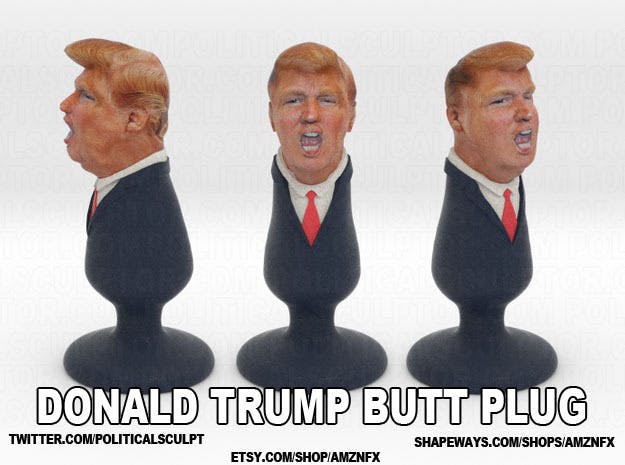 “I usually make Butt plugs to insult dictators, homophobes and politicians,” Sosa wrote on the product page. You might remember him for his carefully crafted Vladimir Putin butt plugs back in March. “However, when i heard Donald Trump’s remarks about Mexicans and latinos from south america i was extremely angry. You see I was born and raised in Mexico and moved to United States when i was 11 years old. So i don’t approve of what Donald Trump, Ted cruz and the republican party have to say about us hard working americans.”

On his site, PoliticalSculptor.com, Sosa offers a range of bobblehead doll-esque sex toys. From New Jersey Gov. Chris Christie, to Toronto Mayor Rob Ford, he has no shortage of crazy people to plug up there.

But this time, Sosa set his 3D-printing talents on the infamous Trump, who, in his presidential bid announcement, decided to take aim at the Mexican immigrant community. He called them “rapists,” and then tried to modify it by saying, “and some, I assume, are good people.”

In response to this, Sosa writes: “I’m no rapists and no drug dealer. I have a college degree in 3D animation and run my own 3D printing business and guess what? I can make you into any shape i want and 3D print you and sell you to others who share their dislike of you.”

He continued: “You can threaten to sue me like you have done hundreds of times to others. However, You are a Public figure and me making you into a shape of a butt plug is Freedom of speech. Welcome to America Mother Fucker!!”

He closed by saying, “So next time you decide to insult a whole race in order to further your political career or get yourself on TV. Remember we are engineers, we are 3D printers, we are doctors, we clean your house and we cook the food you eat so Don’t Fuck with us.”

Unfortunately, the $27.99 plugs are not for actual use, as they’re made of rough and porous sandstone. But in this case, it’s absolutely the thought that counts.