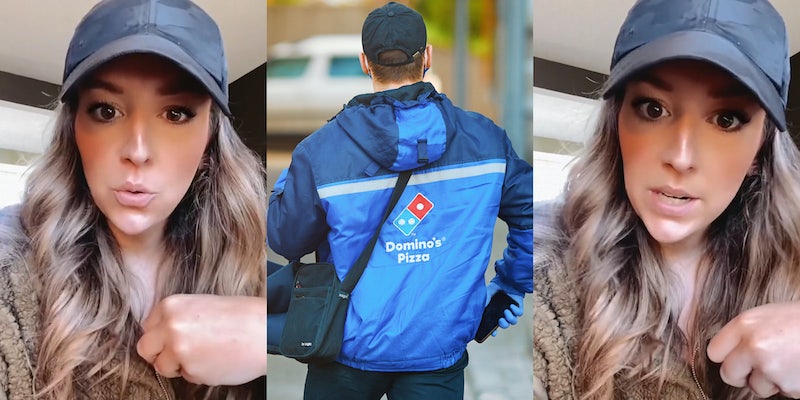 ‘Domino’s, we got a bone to pick’: Customer says delivery driver made antisemitic comment at door

'You really need to take a hard look at who you hire because this is completely unacceptable.'

In a viral video, TikToker Jen Speer (@thejenspeer) calls out a Domino’s delivery woman for allegedly making an anti-semitic comment while dropping a pizza off at her door.

“Domino’s, we got a bone to pick,” she says at the beginning of the clip.

Speer met the delivery driver at the door and after not hearing what the woman had said the first time, Speer laughed as a default response.

“She then proceeds to say ‘they’re trying to do that World War 3 stuff,’” Speer recalls.

The creator asked what she meant, to which the woman asked Speer if she had seen World War II documentaries. Speer, slightly confused, said that she has.

“She then says ‘those Germans got it right’,” Speer claims.

The TikToker explains that she “wanted to lose her marbles on her” but that because the woman knew where she lived, she didn’t want to give her a reason to come back.

“Domino’s and employers right now, you really need to take a hard look at who you hire because this is completely unacceptable,” she says.

In the comments section, users wondered what the comment had to do with Domino’s.

“I get it, you’re right to be concerned. But like this isn’t Domino’s fault,” one user commented.

“Like Domino’s just knew she was gonna pull this…. Girl….,” another said.

“People are too bold and brazen nowadays. I’m sorry this happened, I’d lose my ish too,” a third user agreed.

In a second video, Speer shared an update after Domino’s reached out to her just ten minutes after she posted the original video.

‘Within twenty minutes, I got a call from the local customer service representative,” she says.

The representative was very apologetic, according to Speer, who also explains why she posted the video.

“My intent was just to raise awareness of the situation and that I do not condone that type of speech,” Speer says.

She adds that if the woman said it to her, she could be saying it to other customers as well. The representative made sure Speer knew that they would take care of the issue “because that type of speech doesn’t align with their brand or values.”

“Thank you Domino’s for handling that in the most professional way possible,” Speer concludes.

The Daily Dot reached out to Speer via Instagram direct message and Dominos via email.