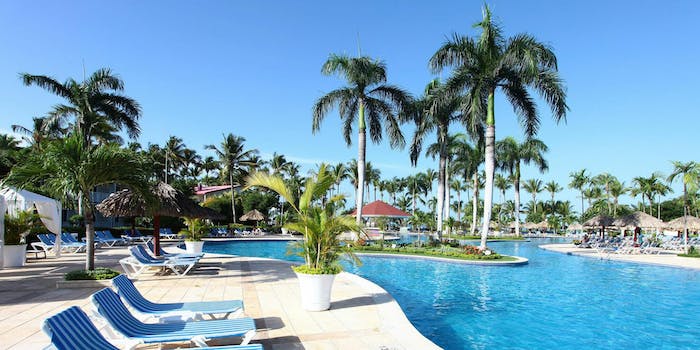 Online travel platforms are still advertising a resort in the Dominican Republic without warnings despite the mysterious deaths of three American guests in the past month and numerous reports from other guests who say they have fallen violently sick during their stays.

The State Department is investigating the resort, Grand Bahia Principe La Romana, after a woman and a couple died on the premises within five days of each other, BuzzFeed News reports.

Miranda Schaup-Werner was reportedly on a trip with her husband on May 25 when she collapsed after taking a drink from the minibar to her room. Another couple, Edward Nathaniel Holmes and Cynthia Ann Day, checked in on the same day at the resort’s adjacent hotel. Five days later, on the day they were supposed to check out, Holmes and Day were found dead in their hotel room.

“We were drooling excessively. My eyes would not stop watering,” said Kaylynn Knull of her trip with her boyfriend, adding that the symptoms persisted even after they changed rooms. “That night, we both woke up soaked in sweat at like 4 in the morning and kind of terrified.”

Susie Lauterborn and her husband, Doug Hand, had a similar experience at the Grand Bahia Principe in January 2018. Lauterborn told BuzzFeed that they suffered from severe nausea, cold sweats, body aches, and rashes. She said that the “stabbing pain” in her stomach was “unlike anything” she had ever experienced despite suffering from intestinal infection earlier in her life.

Another tourist reported falling sick during his more recent stay at the resort.

Myroslav Sparavalo, who fell sick on his third day during the trip with his wife, told BuzzFeed he was having dinner when he started feeling unwell. He had a severely high increase in blood pressure. After contacting the hotel authorities, he was rushed to the hospital where he was in intensive care for 24 hours. He recovered soon after he returned home to New York.

The symptoms, especially the actions preceding them—such as consuming food or a drink—are similar in almost all the cases. Sparavalo’s doctor noted he had fluid in his lungs, which was cited as the cause of death for both Holmes and Day, according to BuzzFeed.

While the investigation is ongoing, popular travel platforms—including TripAdvisor, Booking.com, Expedia, and Hotels.com—continue to advertise the resort’s hotels, some without warning.

As of Monday morning, TripAdvisor’s page for Grand Bahia Principe La Romana had an advisory message for those clicking on the listing. “TripAdvisor has been made aware of recent media reports or events concerning this property which may not be reflected in reviews found on this listing,” the warning says. “Accordingly, you may wish to perform additional research for information about this property when making your travel plans.”

In an email to the Daily Dot, TripAdvisor said a listing on their website is not a direct endorsement of an institution and that the platform maintains a policy to “list every open business to ensure travelers have the right to write about their experience—good or bad. Pulling a business listing from our platform only enables bad actors in tourism to operate in the darkness, and that is not a positive experience for travelers.”

In the notification, TripAdvisor says it aims for travelers “to do research outside of TripAdvisor, including a simple news search that should produce articles about the safety issue.”

Other platforms—including Expedia, Orbitz, Hotels.com, Booking.com, and Apple Vacations—did not immediately respond to the Daily Dot’s request for comment. A search on these websites at the Grand Bahia Principe La Romana showed up rates and available dates, and some had special offers. Unlike TripAdvisor, these searches did not show a warning message for the resort.

Apple Vacations, which is what Lauterborn and her husband used to book their trip, also had listings for the resort on its website. Lauterborn told BuzzFeed that after complaining to Apple Vacations and requesting a refund, the couple received only $100 in vouchers.

Even if these travel websites aren’t issuing advisories, guests are doing their own research. A Facebook group called Grand Bahia Principe La Romana had numerous questions and queries from people who have already booked their stays at the hotel in the upcoming weeks.

“Be safe. Stay alert. Don’t go anywhere alone. Don’t drink from the minibar!! And have fun!” one commenter advised people who had booked vacations at the resort.

“I was in the pool and [my mother] left to go walk on the beach and I was drinking with other people and then I started to notice I wasn’t feeling like myself,” commented another. “So I went to the room and I literally was sick the whole entire night so I’m not sure if it’s something they’re putting in the drinks.”

Other comments said that they had no issues during their recent stays at the resort.

Grand Bahia Principe La Romana has continued to defend itself and did not respond to the Daily Dot’s request for comments. A statement on the resort’s Twitter account said the news reports contained “inaccurate and false information” and that further statements won’t be made that “may interfere” with the ongoing inquiries by authorities.

“We reiterate our firm commitment to collaborating completely with the authorities and hope for a prompt resolution of their inquiries and actions,” the statement said, adding that some resort employees and their families have faced “insults and threats.”