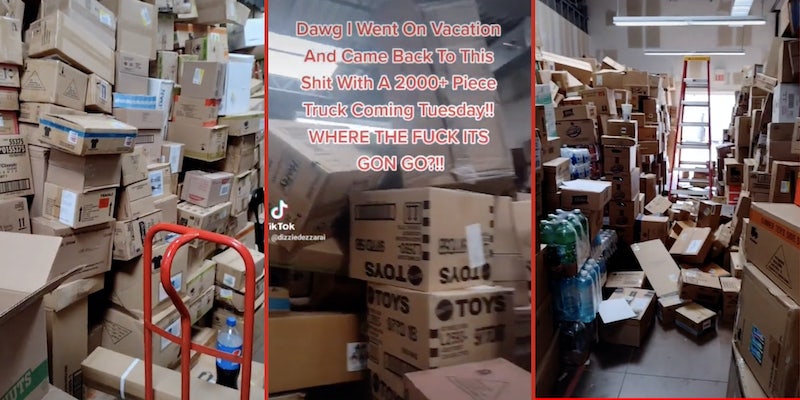 ‘The shelves be empty bc they got everything in the back?’: Dollar Tree worker returns to backroom filled top-to-bottom with inventory after vacation

'Dear Universe I need you to move on my behalf and send me a better position...'

It can be really infuriating when you’re the only person in your group that takes initiative for certain job responsibilities. Maybe you were the kind in a team assignment in school that was picking up everyone else’s slack. Or maybe you’re the one individual in the workplace who is the only one who seems to care if a deadline or deliverable is completed on time.

And while there are certainly folks who are psychologically classified as having “provider” personality types, and folks who really do love working their proverbial tails off, burn out is going to happen at some point. Even the biggest workaholics in the world need to take some time off now and again.

And one would like to think that while they’re on a vacation that they’re going to have someone back at homebase watching their back for them, but apparently this wasn’t the case at the Dollar Tree location TikToker @dizziedezzarai, who goes by the name of Dessy, had the misfortune of working at.

In a now viral clip, the individual recording the video says that they are the “merch manager” of the location, and after he came back from a three week vacation, he was shocked to see what the store’s back room looked like.

In the now-viral clip, Dessy placed a text overlay that reads: “Dear Universe I need you to move on my behalf and send me a better position…this week!!”

He shows off the stock room that is almost entirely full of boxes. According to the TikToker, none of his coworkers or other employees at the Dollar Tree location attempted to break the packages down or bring any of the inventory out onto the floor’s store.

When he asked for an explanation as to why they allowed the back room to pile up on items, no one could offer up a solid reason, which left Dessy understandably exasperated.

To make matters even worse, Dessy said that the time of recording the video, his store was expecting another 2,000 item shipment the following day. He floats his video camera around the stock room one more time to reinforce that it would be physically impossible to fit any more inventory in the space while allowing employees to still walk through to retrieve items.

Knowing that the bulk of the work in re-organizing the back room would ultimately fall on his shoulders, and fed up with the way the store was run, Dessy decided to immediately look for work elsewhere.

Tons of commenters sympathized with Dessy’s plight, while also pointing out that they’ve noticed the store shelves at the Dollar Tree locations they frequent always did seem suspiciously bare.

“Ok so the shelves be empty bc they got everything in the back?? Noted,” one commenter wrote.

“They’re wrong for that. Everybody quit at the one by my house,” another remarked.

“At this point imma start shopping in the storage room of DT,” a third viewer said.

Others remarked that the only way to rectify the situation would be to literally close for the day and have every employee help in restocking floor inventory.

Dessy, however, applied to other jobs anyway, and lo and behold, his TikTok prayers were answered. He was offered a job at a Lowe’s Home Improvement location, which he said he was going to immediately take.

Although at least one commenter mentioned that he probably could’ve negotiated for higher pay, “13.33 wth lowe’s shorted you they hired me at 18.00 you need revaluate,” @iamlovekillz said.

It should be noted, however, that the starting amount Dessy was offered at his Lowe’s job is close to the $13.64 average that Pay Scale reports the hardware chain pays its employees.