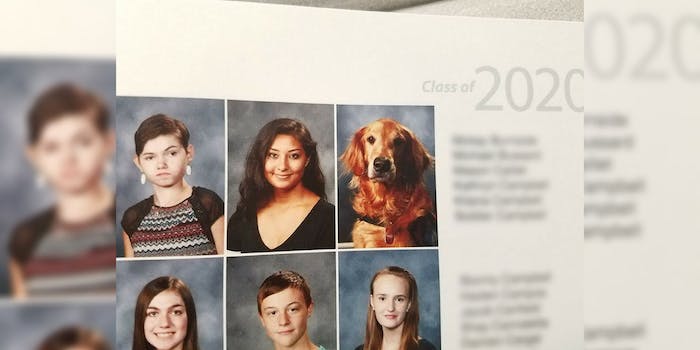 It's an honor well-deserved.

This year when students from Timber Creek High School in Fort Worth, Texas, thumb through their yearbooks to sign summer wishes and count the number of times they’re pictured, they’ll catch a glimpse of Kathryn and Soldier Campbell. One is their freshman-year classmate. The other is her Golden Retriever service dog.

On Tuesday, the school’s news publication, the Timber Creek Talon, shared an image of the freshmen lineup in the 2017 yearbook on Facebook. On the top row, left, is Campbell, and two photos over, most obviously, is her furry, four-legged friend Soldier.

“Yes, there’s a dog in our yearbook. Here’s why,” the post read, linking to a story on Campbell and Soldier written by Talon editor and Timber Creek sophomore Samantha Sandusky.

In the article, published in October, Sandusky explained that Soldier is Campbell’s service dog—when she’s anxious, in an unfamiliar place, or experiencing seizures and unable to come to school, Soldier is by her side, providing her comfort and continuity:

On good days, she gets up and goes to school like everyone else, except that her school day is much shorter. She goes home, watches TV, naps and spends her time with her siblings and parents. However, bad days are “spent in a haze of seizures and rescue medication,” as described by [Kathryn’s mother] Kim Campbell. “She either stays in bed or on a bean bag or recliner, with oxygen close by. Seizures cause her to lose track of time, and can even cause memory loss.”

Sandusky told the Daily Dot that she wrote the story as a way to explain Soldier’s sightings around the school, and the significance his presence has on Campbell. Sandusky’s publication adviser, Greg Janda, had proposed Campbell’s story after her brother, another Timber Creek media student, had mentioned it to the staff.

Sandusky shared that students who read about Campbell and Soldier’s bond said the article changed their perspective to be more understanding of Soldier’s significance to his owner.

“The story definitely opened my eyes to always remember that every life matters and can make a huge difference,” Sandusky told the Daily Dot via email. “I hadn’t known the story behind Soldier and Kathryn before, and I learned through interviewing the Campbell family how strong their relationship truly is and the literal life or death impact Soldier has for Kathryn.”

Kathy Beers, Timber Creek’s yearbook adviser, told the Daily Dot that the student yearbook staff’s decision to include Solider alongside Campbell in the book was organic. The 2017 book’s theme was “Shine Brighter Together,” and Soldier helps Campbell shine her brightest, Beers wrote.

“Wherever Kathryn goes, Soldier goes also. He attends PE class, pep rallies, and even received a homecoming mum, this year. So it was only natural that when the class lined up for pictures, Soldier got a turn, as well,” Beers told the Daily Dot via email. “He’s as much a part of our school as any soul who enters our doors.”

“For Soldier, Kathryn is his responsibility,” Campbell’s mom told Sandusky in October. “Due to her disabilities, there is not much that Kathryn can control about her life … but Soldier is always there.”